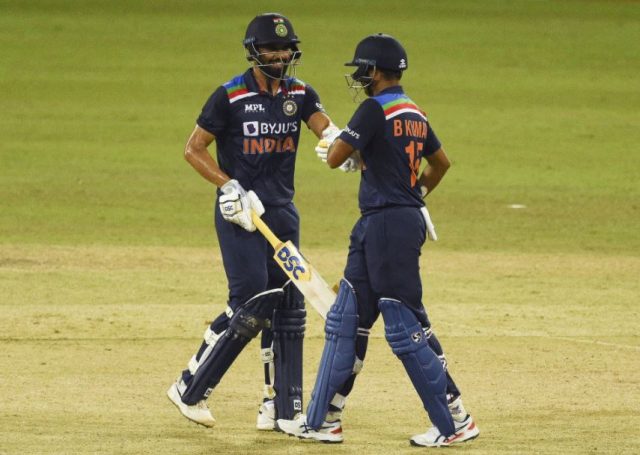 Team India once again showed resilience during tough times to scrape through in a thrilling second ODI against Sri Lanka. With the win, the Men in Blue take an unassailable 2-0 lead against the home side in the three-match ODI series.

Sri Lanka started off on a positive note once again after opting to bat first. Their openers Avishka Fernando and Minod Bhanuka played freely, putting up 77 for the first wicket. India turned to spin which brought them the turnaround. Yuzvendra Chahal prized out two wickets in two balls, with Bhanuka Rajapaksa getting outfoxed by the leg-spinner.

There was a 47-run partnership that followed, during which Avishka reached his fifty. He fell soon after and it was up to Charith Asalanka to take the innings forward. He did well, scoring a decently paced 50 and a fantastic cameo from Chamika Karunaratne in the end saw Sri Lanka reach 275/9 in their stipulated 50 overs. Experienced campaigners Bhuvneshwar and Chahal picked three wickets apiece, while Deepak Chahar scalped a couple of wickets with his knuckle balls.

The chase was expected to be easy after the display put up by the Indian batsmen in match one. However, things weren’t as straight forward this time. India were rocked early by Sri Lankan leggie Wanindu Hasaranga when he knocked over Prithvi Shaw in the 3rd over.

They kept up with the required rate but lost wickets at regular intervals. Half the Indian side was back in the hut when India was 160 runs away from the target. Soon after, a well set Suryakumar Yadav’s dismissal was deemed to be the final nail in the coffin. However, Deepak Chahar thought otherwise.

What a fine knock this has been! 👌 👌 #TeamIndia #SLvIND

First with Krunal Pandya and then with Bhuvneshwar Kumar, Chahar stitched valuable partnerships en route to his maiden ODI fifty. It was a fabulous effort from Wanindu Hasaranga, but his spell went in vain. India held their nerve eventually to come out victors by 3 wickets in the cliff-hanger.

Chahar stayed unbeaten in the end and also scored the winning runs, to help India secure the ODI series against Sri Lanka.