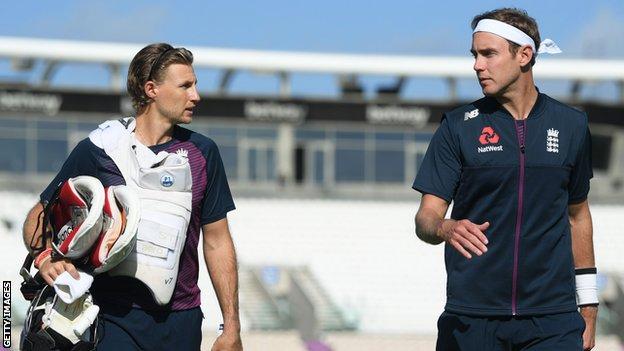 England’s long-serving quick bowler, Stuart Broad has been named England’s vice-captain for the Test series against New Zealand, which starts at Lord’s on June 2nd. James Anderson was the more natural option, however, considering he had served as the vice-captain for England back when they toured Australia and New Zealand in 2017-18.

But the England management has decided to assign the role to Broad instead. This will be Broad’s first stint in a leadership role in Tests. He had captained the side in a few limited-over games, 27 T20’s and 3 ODI’s to be precise. This was back in the 2011-14 period.

Stuart Broad is best for the role – Joe Root

The decision to make this change was forced on England as their usual vice-captain, Ben Stokes was ruled out of the New Zealand series owing to an injury he suffered while fielding for Rajasthan Royals in the IPL. With reports stating Jos Buttler is set to be rested as well, Broad was immediately assigned the responsibility.

“Stuart has been a senior player within this group for a long time now. He speaks extremely well, he’s got a very good cricket brain and he’s got captaincy experience in the short format”, Root said. He continued saying “He’s the right man to take that on in Ben and Jos’ absence. He’s an integral part as a senior player and very much a leader within that bowling group. It’s a great opportunity for him to take that on.”

“He’s at real peace with his game at the minute. He’s got a really good understanding of how he’s going to operate. He obviously is very comfortable and understands his role within the squad and the team and knows what’s required of him, and sets a very good example to younger players within the group.”

With the appointment of Stuart Broad as the vice-captain, this all but guarantees Broad’s spot in the team, at least for the first test match.

When asked whether he’ll continue to fulfil the role in the second game, Root said “We’ll have to wait and see because you don’t know how this game is going to go but it certainly gives him a better chance.”

Joe Root also mentioned that James Bracey will be making his debut as a wicketkeeper-batsman. Due to the injury suffered by Ben Foakes, this was always on the cards.

“We haven’t quite got that clarity as to exactly what we want to go in with yet in terms of the balance of the side and how that looks,” he said. “It’s unfortunate when you’re missing pivotal all-rounders but that provides a great opportunity for others to come in and show their worth,” Root added.