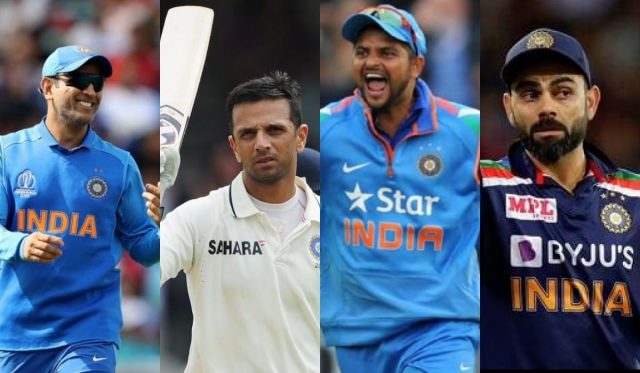 Former Indian cricketer Suresh Raina is currently in the UAE preparing for the second half of IPL 2021. CSK are placed in the top half of the points table winning four of their first seven games. The former India batsman, who announced his retirement from international cricket last year, was asked to rank the three captains, and Raina was pretty clear where to place Dravid, Dhoni and Kohli in his top three.

Suresh Raina started under Rahul Dravid flourished under MS Dhoni and played a fair length of time with Virat Kohli.

“I have played a lot with Mahi bhai, as a batsman, as a player, as a leader too. When I was starting and the team was being built, I played under Rahul bhai. So, for me, it would be Dhoni, Dravid and Kohli. Virat and I… we have had some wonderful partnerships together and he has made quite a few records. So, I would say MS, Rahul Bhai and Cheeku (Virat),” Raina told RJ Raunak on the show ‘13 Jawaab Nahi’.

The friendship between Dhoni and Raina go long way back. The southpaw played with Dhoni in 2011 and 2015 World Cups. He was also a member of the 2016 T20 World Cup squad which made the semi-finals. Raina in fact announced his international retirement on the same day as MS Dhoni.

The pair of Dhoni and Raina have also won three IPL titles together, the last of which came in 2018. Since then, they are in the quest for their fourth IPL title and looks good to get it this year.

Meanwhile, Vira Kohli also is waiting to put his hands around the IPL title for the first time. The side made the final a few times but has failed to win it as yet. Heading into the UAE leg, RCB are placed inside the top four and Kohli himself is confident of making it happen this season.