The Suryakumar Yadav and Virat Kohli saga have another twist as this time it was Suryakumar himself complimenting Virat’s batting in his latest Instagram post. Meanwhile, the Indian skipper Virat Kohli is currently in Australia gearing up for the matches against Australia.

The stylish batsman, who will miss three Tests, recently uploaded a video of him practising on the centre wicket to the Indian bowlers to which Suryakumar Yadav was seen complimenting the batsman. Meanwhile, a couple of days back noticed Suryakumar Yadav took a dig at the Indian skipper Virat Kohli by liking a Twitter post which term Kohli as a ‘Paper Captain’.

Even during the IPL, when Mumbai Indians faced Royal Challengers Bangalore we noticed how Suryakumar gave Virat a fine stare while batting which does defy that Surya himself isn’t a big fan of the Indian skipper and does go to show that all isn’t well between the two.

Today there is a completely new twist to the tale as Suryakumar Yadav commented ‘Energy, Sound, Domination’ to Virat Kohli’s video which now goes to show that nothing is actually wrong between the two and by the looks, it does look like they’re in good faith. 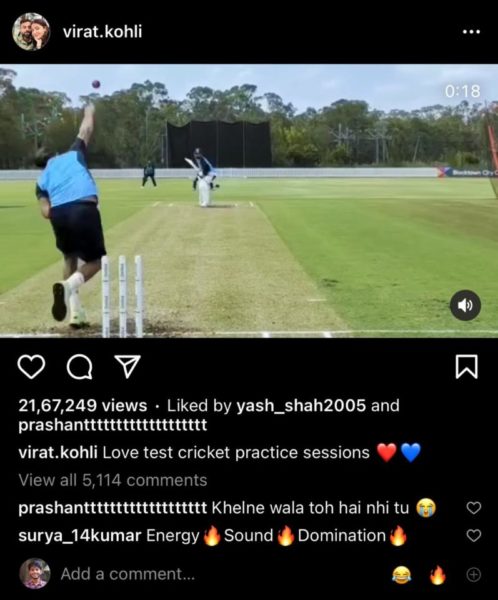 Australia will face India in 6 limited-overs games and 4 Test matches. The 3-match ODI series begins on 27th November followed by 3 T20Is. The Border-Gavaskar Test series will start on 17th December with a pink-ball day-night Test in Adelaide followed by the Boxing Day Test in Melbourne, New Year’s Test in Sydney, and the last Test in Brisbane.

India will lose a big chunk of its batting as Virat Kohli will return home after playing the limited-overs games followed by the 1st test at Adelaide. After which it will be Ajinkya Rahane who will lead the side in Kohli’s absence.