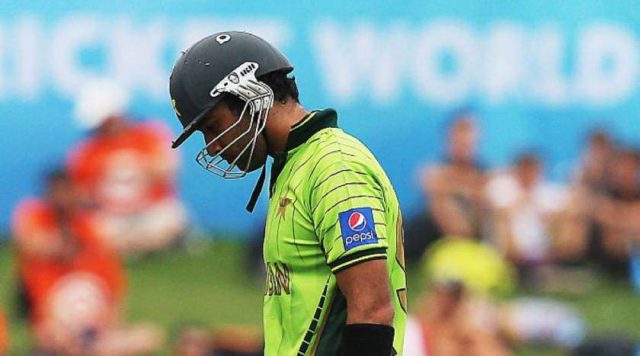 Pakistan have been dealt with a major blow after Sohaib Maqsood was ruled out of the ICC T20 World Cup after failing an MRI scan on his lower back. Maqsood had sustained a back injury on October 6 during the National T20 Cup at the Gaddafi Stadium in Lahore.

Maqsood had been in good form since making his return to the national team after a gap of five years, making a mark in recent tours of England and West Indies. Sohaib Maqsood then followed it up by helping Multan Sultans to the PSL title this year, scoring five half-centuries in 12 matches.

BREAKING NEWS — Shoaib Malik has been added in #T20WorldCup squad of Pakistan as a replacement of injured Sohaib Maqsood.

Sohaib Maqsood has been replaced by veteran all-rounder Shoaib Malik. He captained Pakistan in the inaugural event in 2007 and was a member of the side that won the tournament in 2009. After missing the West Indies event in 2010, he featured in 2012, 2014 and 2016 tournaments.

Fakhar Zaman, Sarfaraz Ahmed and Haider Ali have been included in the Pakistan squad for the ICC T20 World Cup 2021, with the PCB announcing three changes on Friday (October 8).

Fakhar, who was originally part of the reserves, will now join the 15-member squad while Khushdil Shah has been moved to the reserves. Sarfaraz and Haider replace Azam Khan and Mohammad Hasnain respectively.

“After reviewing player performances in the highly competitive National T20 and in consultation with the team management, we have decided to include Haider Ali, Fakhar Zaman and Sarfaraz Ahmed in the squad for the ICC Men’s T20 World Cup 2021,” chief selector Muhammad Wasim said. “The three in-form players bring with them a wealth of experience and talent and provide further stability, balance and strength to the side.

Pakistan will begin their T20 World Cup campaign in a high-profile clash against India on October 24 in Dubai.