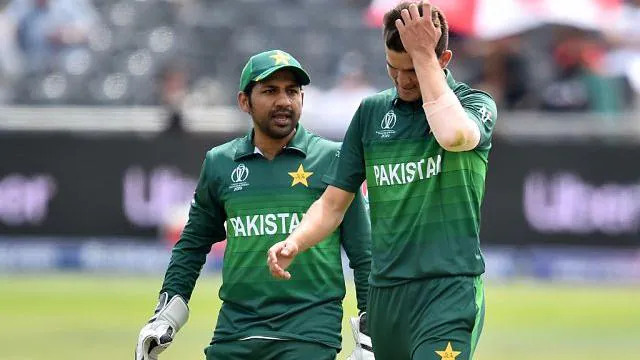 Former Pakistan skipper Sarfaraz Ahmed and pace spearhead Shaheen Afridi were involved in a verbal battle during the game between Lahore Qalandars and Quetta Gladiators in the Pakistan Super League (PSL). The incident occurred in the 19th over of the Gladiators’ innings.

Sarfaraz Ahmed, who was on strike, was facing Shaheen Afridi when a fast bouncer from the latter hit him flush on the helmet. After Sarfaraz went through for a single, he looked visibly upset and gave Shaheen a piece of his mind.  Although the delivery was eventually termed illegal and the umpire called it a no-ball, it was enough to rile up a heated exchange.

Shaheen Afridi didn’t back down from the verbal fight

The young pacer didn’t take the kind words lying down and started walking towards the former Pakistani skipper in an aggressive fashion. Things started escalating and the umpires along with Shaheen’s experienced teammates, Sohail Akhtar and Mohammad Hafeez, tried to intervene and calm things down.

Incase you missed it. pic.twitter.com/UTtpvrgTd3

Quetta Gladiator’s captain Sohail Akhtar later termed the incident as part and parcel of the game. Social media had a mixed reaction to the situation, with some chiding Afridi for reacting aggressively towards his former captain while others defended him saying he was well within his rights to bowl the bouncer.

Mpumelelo “Pommie” Mbangwa, who was the commentator on air, had a few harsh words for Sarfaraz following the incident. He stated that the reaction from the former skipper felt like an abuse of power of a senior member.

“I don’t understand the exchange though. What’s he [Sarfaraz] telling him? Is he [Shaheen] not allowed to bowl a bouncer? Well no, I’m sorry! He can bowl whatever he likes. Bowl a little slower? No! You get on with your batting. I mean that’s an abuse of power of seniority,” he said.