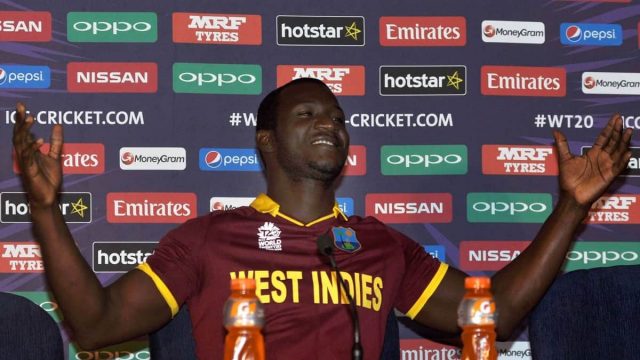 Former West Indies captain Darren Sammy has shared an emotional note to the West Indies team who play against Australia in their final league match of the T20 World Cup 2021 on Saturday. Sammy stated that he would take this opportunity to celebrate the legacy this team has created over the years irrespective of the result in their last game.

Notably, Sammy has led the team to two T20 World Cup titles in 2012 and 2016 as well. He, however, named the end of this World Cup campaign as the end of a dynasty as well.

“Today, win or lose I choose to celebrate the legacy that this T20 team created. West Indies were kings in this format and today brings an end to that era which I played in. The dynasty is over and I thank you for all the great memories,” Darren Sammy wrote on Twitter.

Today, win or lose I choose to celebrate the legacy that this T20 team created. @windiescricket were kings in this format and today brings an end to that era which I played in. The dynasty is over and I thank you for all the great memories. pic.twitter.com/pA9MF6CuLr

“Overall it has been a disappointing campaign” – Kieron Pollard

However, all-rounder, Dwayne Bravo has also announced his international retirement, and this game might be the last one where we could see Chris Gayle, Ravi Rampaul and Lendl Simmons playing for the country.

However, as far as the match is concerned, Australia has won the game by 8 wickets.

After the win, Kieron Pollard said: “I think overall has been a disappointing campaign. The batting has lived up to expectations, bowling has been decent. We could have done better with the fielding as well. Overall we weren’t good enough. But for me, it’s the end of a generation/era where you have some guys who have done some good things for T20 cricket, not only in the Caribbean but around the world. Sometimes one tournament you don’t want to sum up the entire thing when it comes to that but rationally these guys have done pretty well for themselves and we as people are very, very proud. Obviously we need to look at the way we play T20 cricket again. Our team is set-up for powerhitters to do a lot of damage but we weren’t able to do that.”

He continued: “We have seen in these conditions that one guy in that top four has to bat through, when you get in try and stay as long as possible. It’s hard for the guys to come and hit straightaway. That is something that we need to do better but the good thing is that we have to start from foundation now and that’s the reality of the situation. There is nothing that we can do about it now. That journey would not have just started at this World Cup.

The journey would have started earlier to get points accumalated whatever needed to qualify. For us it is what it is. We have to live with that. Couple of years ago we have to qualify for the 50-over World Cup and we did. So whoever in the position in terms of personnel now, we have to rebuild and do it. Thanks to everyone who have supported us. Thanks to the Caribbean fans, yes we disappointed you as a team, sorry. But life goes on. Thank you very much,” Kieron Pollard concluded.