Sachin Ramesh Tendulkar is arguably the most complete batsman of all time. In his illustrious career that lasted over 24 years, he changed Indian cricket completely. The batting maestro owns every possible batting record in both Tests and ODIs. Often he was the lone warrior for his team in the 90s and would be the only man standing against the opposition.

As the new millennium came he changed his approach and game but still making runs for fun remained constant. On the occasion of his 49th birthday, we look back at some of his most iconic knocks in both Test and ODIs. Selecting just 5 from his numerous legendary knocks wasn’t easy but we have tried to bring back some great memories through some of his epic knocks.

Here are the top 5 greatest knocks of Sachin Tendulkar of all time: 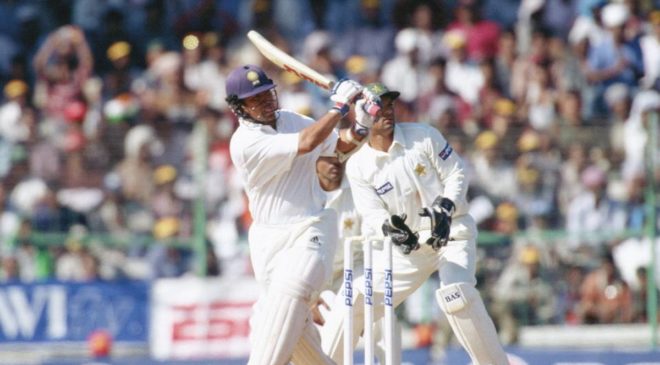 Yes, this will forever remain one his greatest, simply because he stood alone against Pakistan while chasing 271 in the 4th innings. India had their back against the wall early as they lost 2 wickets for just 6 runs and in walked the little master with his MRF bat. He was up against a potent bowling line-up of Pakistan which consisted the likes of Wasim Akram, Waqar Younis, and Saqlain Mushtaq.

Sachin himself had a point to prove after getting dismissed for a duck in the first innings. He started his innings steadily and trusted his defence on a pitch that was getting harder and harder to bat. Once he saw wickets falling in a heap at the other end he decided to shift gears. He took his chances against Saqlain and continued to be aggressive against him.

After reaching his half-century he activated his beast mode and punished the Pakistani attack. It looked as if he was batting at a different wicket to others and reached his hundred and was single-handedly taking India home for a famous win. He reached his century but he knew he had to remain till the end. Then suddenly he miscued a lofted drive and was caught on the off-side. Pin drop silence in the stadium and Sachin departed with India still needing 17 runs to win.

“WHAT HAVE YOU JUST DONE?” – Twitterati Hail Ruturaj Gaikwad As He Slams Seven...

“It Is The Best Form Of Cricket” – Brendon McCullum On...

“I’m Trying To Make The Most Of The Opportunity I Get”...