Virat Kohli is arguably the greatest ODI batsman of all time and his tally of 11,867 runs at an average of almost 60, justifies the fact that he is the best of his generation. The thing that makes the Indian captain a cut above the rest, is how quickly he adapts and adjusts to different conditions and bowling attack all around the world. He can pace his innings beautifully and never lets the opposition to get on top of him at any point of the match.

The 31-year-old is currently at the peak of his powers and has played some unforgettable knocks in his illustrious career. But which innings is the best that Virat Kohli has played so far in his ODI career? Is it the fastest hundred by an Indian against Australia or the epic hundred in the run chase against Pakistan in the Asia Cup?

Here are the top 5 knocks of the sensation Virat Kohli in ODIs:

Read More: 5 Times When MS Dhoni Lost His Cool On The Cricket Field 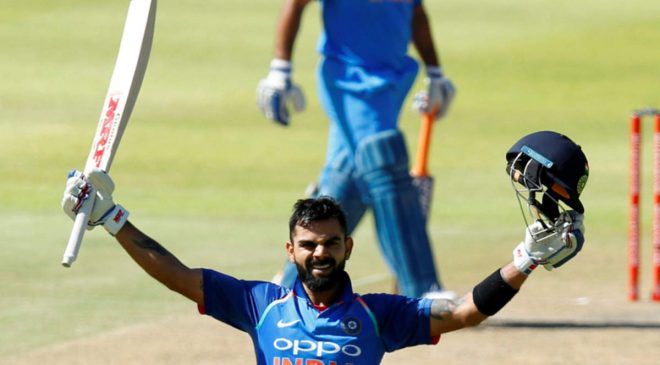 This inning is special as it came in the overseas condition in South Africa which is generally considered to be a difficult place to bat for sub-continent batsman. Virat Kohli came into to bat in the second over itself and was up against the leader of the South African attack Kagiso Rabada. The talismanic run-scorer understood the pitch quickly and took his time to settle and focused on stealing ones and twos early on in his innings.

Once set, Kohli decided to up the ante and played some sublime strokes against both pace and spin. Kohli brought up his 34th ODI hundred and then accelerated in the last 10 overs. He ended up making 160* off 159 balls that included 12 boundaries and 2 maximum, his hook shot for six off Rabada in the final overs was the shot of the match and took India past 300.

India ultimately won the match by a huge margin of 124 runs, as Virat Kohli was awarded the player of the match.

Read More: Top 5 Hottest Wags Of Cricketers Around The World