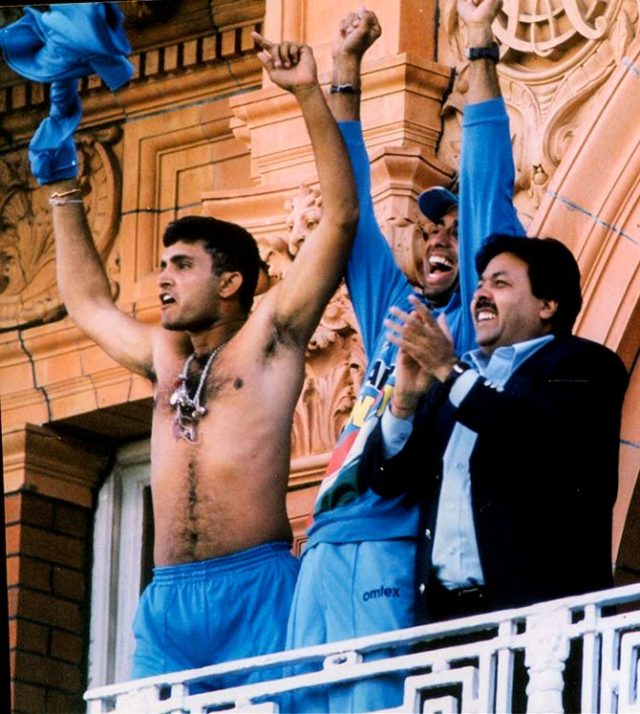 Nineteen years ago on this day, India clinched one of the most memorable victories in their cricketing history. The victory runs were followed by an even more historic celebration. Sourav Ganguly, India’s captain at the time, went shirtless before waving it on the iconic Lord’s balcony. It was a highly savored win for one of India’s greatest captains, and he didn’t refrain from showing his emotions.

The scene was set at the Lord’s in 2002 as the NatWest final trophy was being contested between hosts England and India. Cut to the first innings where Marcus Trescothick and Nasser Hussain bullied the Indian bowling line-up to set a massive total of 325 on the board. Although India had a strong batting line-up, this target was considered to be a Herculean task back in those days.

A moment India fans – or @SGanguly99 – will ever forget 👏

India started off on a brilliant note. Skipper Ganguly and Virender Sehwag took the English apart, racing away to 106 for no loss after 15 overs. However, a collapse of disastrous proportions soon hit India. They lost half the side for a mere 40 runs. It looked like the game was almost in the bag for the hosts.

Out came Mohammad Kaif to join Yuvraj Singh, two youngsters yet to find their feet at the international level. While Yuvraj played the role of the aggressor, Kaif tucked it around to keep the scoreboard moving. Their 121-run partnership came to an end when Yuvraj was dismissed by Paul Collingwood. Kaif then took over to continue the assault and helped India inch closer. The Men-in-Blue managed to sneak over the line eventually, which sparked off wild celebrations in the Indian camp.

Sourav Ganguly removed his shirt and started waving it on the Lord’s balcony while his teammates were overjoyed with what had transpired. The now-iconic celebration was done after England all-rounder Andrew Flintoff had done a similar thing at the Wankhede Stadium. Ganguly got his sweet revenge and also etched the moment in the hearts of fans all over the country. On the 19th anniversary of the classic celebration, Twitter users reminisced the nostalgic event.

Here are some of the reactions to it:

Ganguly's captaincy was a treat for any cricket lover in 2000s. He was at the helm only for 4-5 years but he showed how to win matches abroad. Watching Natwest final late at night n celebrating will always remain as one of the best cricket memories. https://t.co/fH6lrZYbwb

On this day in 2002..🏆🏆 #TeamIndia won the #NatWestSeries at Lords under the dada's captaincy..🇮🇳🇮🇳 And that was the perfect reply by Ganguly (shirtless) to Andrew Flintoff in Lords Balcony..😂😂 #Ganguly 💙💙 #NatWestTrophy #Lords #Cricket 🏏🏏 pic.twitter.com/HJpHkuEYFO

As much legendary as the chase is how skipper Ganguly celebrated from the Lord’s balcony by taking off his jersey and waving it fiercely, giving cricket one of its iconic moments. 💙💙💙💙#OnThisDay #NatWestTrophy #SouravGanguly #TeamIndia

We won the NatWest trophy by defeating 🏴󠁧󠁢󠁥󠁮󠁧󠁿 at Lord's, by 2⃣ wickets. @YUVSTRONG12 & @MohammadKaif delivered one of the best on field performance at Lord's!