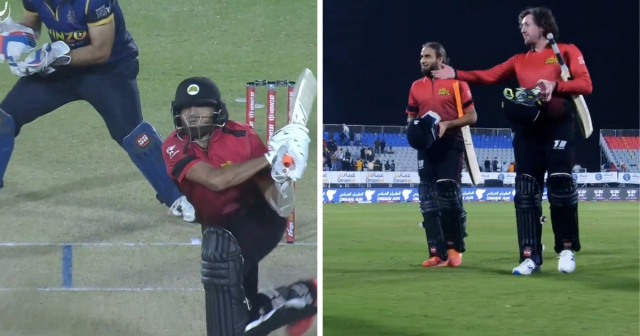 Legends League Cricket is currently taking place in Oman, where three teams have been taking part – World Giants, Asia Lions and India Maharajas. While the former players are putting up great performances, Imran Tahir was no different.

However, in the recent match between World Giants and India Maharajas, the former successfully beat the latter. Former England pacer Ryan Sidebottom got the Giants off to a flying start by removing Wasim Jaffer and Subramaniam Badrinath for ducks. While wicket-keeper batter Naman Ojha smashed a 69-ball 140*, Captain Mohammad Kaif backed him well with a fine half-century.

India Maharajas, however, post a 210-run target for World Giants. Although the Giants lost wickets at regular intervals, Kevin Pietersen’s fifty supported them from another end. And, then Imran Tahir came to bat when they needed 72 runs in 6.2 overs.

Imran Tahir came in the crease after captain Daren Sammy got out. Tahir came in the middle and smashed two consecutive boundaries as well. Then Morkel and Tahir started to steady the ship by hitting the opponents bowlers’ all over the park and led Giants to victory.

Morkel scored 21 runs in 15 balls whereas Imran Tahir smashed a blitzy 52 runs in 19 balls, which also included 3 fours and 5 sixes in the way of his innings and took the team to a convincing victory as well.

Here is how Twitterati reacted:

Unbelievable.. Imran Tahir has hit a 19 ball 50 to snatch victory from India.. seems like every South African under the sun has become superman against India.. and we were trolling KL Rahul when he said entire country is playing against India.. shame that we didn’t understand 😭 pic.twitter.com/51A15VxPrl

One of the most comical finishes I’ve seen in a long time. Imran Tahir wins a game out of nowhere with the bat scoring 52*(19) for World Giants. #LegendsLeagueCricket

Tahir is on fire🔥
What a game!

What a six😳😳😳
Tahir changed the game!!

Imran Tahir smashed 52* from just 19 balls including 3 fours and 5 sixes in the Legends Cricket match to chase down 210 runs against India Maharajas.