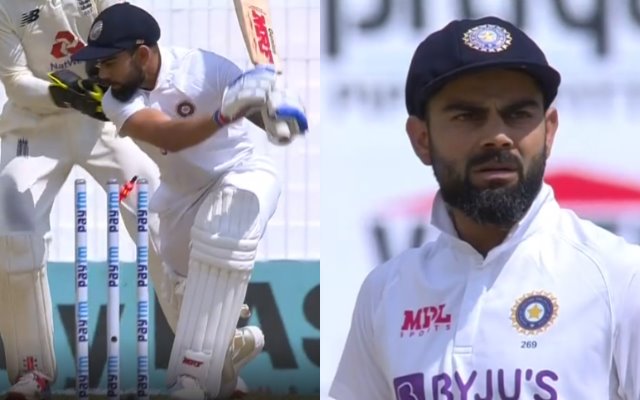 Virat Kohli was expected to lead from the front when he came out to bat on day 1 of the second Test at Chennai. England knew that they had to dismiss Kohli early in order to put under pressure. Joe Root sensed an opportunity and gave the ball to Moeen Ali who has troubled Kohli in the past.

In his first few deliveries, team India skipper looked tentative as Chennai pitch started to play a few tricks. Then Kohli took the strike against Moeen Ali and he tried to straightway go after the England off-spinner. The Indian captain saw the ball flighted outside off and tried attempting a full-fledged cover against spin.

Unfortunately for Kohli and his fans the ball turned sharply and ended up clipping the top of his off-stump through the gate. Kohli couldn’t believe the ball hit stumps and he was castled for a duck by Moeen Ali. England celebrated the massive wicket of the Indian captain as there was pin drop silence at Chepauk.

Twitter Stunned After Virat Kohli Gets Out On A Duck

After the dismissal of Kohli fans on Twitter too were stunned as everyone expected Kohli to play a special knock. Cricket fans on Twitter were extremely disappointed as the long wait for an international century continues for Virat Kohli. In the process, Moeen Ali became the first-ever spinner to dismiss Kohli for a duck in his Test career. England is now right back in the contest as India lost both Cheteshwar Pujara and Virat Kohli in quick succession.

Meanwhile, Rohit Sharma is batting look very easy on a difficult pitch and is batting at a strike rate of around 100. He is currently batting on 80 runs and will be aiming to make his century and stitch an important partnership with vice-captain Ajikya Rahane. Furthermore, here’s how Twitter reacted after Virat Kohli departed for a 5 ball duck.

Virat Kohli has 26 ducks in international cricket but this is first time he is dismissed on 0 by a spinner. #IndvsEng pic.twitter.com/XyzrRTaaf7

Getting an Indian legend bowled through the gate isn’t that difficult as an off spinner !!! #JustSaying #INDvENG

Duck for Virat Kohl, crowd is silent, what a ball from Moeen Ali. India 3 down for 86 in the first innings.

Kohli made umpire go for third umpire reply for a clean bowled.

Kohli bowled out twice in his last six balls faced (by Stokes in 4th inns of 1st Test, Moeen today). He'd been bowled out only 7 times in 12891 balls in his Test career before that (once every 307 overs faced), and only once by an off-spinner (Swann, Ahmedabad 2012). #INDvENG