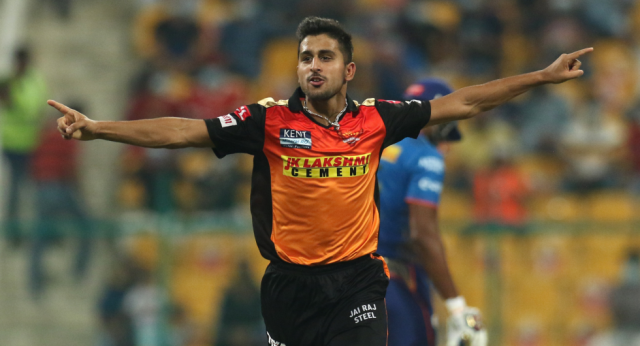 Former cricketer Salman Butt believes young pace bowler Umran Malik may soon make his India debut if he maintains his pace. Salman asserted that the pacer has extra pace, which is unique in Indian cricket.

Umran Malik grabbed the limelight this year, playing for the Sunrisers Hyderabad in the Indian Premier League. He impressed pundits with his pace, consistently knocking 150-mark. Umran was picked as a net bowler in India’s ICC T20 World Cup 2021 contingent. Recently, the SRH bowler has been named in the 14-member India A squad for the tour of South Africa, which starts on November 23.

In a video shared on Salman Butt’s Youtube Channel, the former cricketer highlighted Umran Malik’s extra pace. He added that the 23-year-old might soon be picked for India if he does well in South Africa. Salman said as quoted by Sportskeeda,

“Umran Malik can be included in the Indian team soon if he does well in South Africa during the A tour. He has extra pace, which is something unique in Indian cricket. He consistently bowls at 150 kph. If he can carry on maintaining the speed, he will hold a special status. If he does well (in South Africa), I am sure he will be picked soon in the national team.”

Perfect opportunity for India to try out youngsters in the last T20I against New Zealand: Salman Butt

India has an unassailable lead of 2-0 in the ongoing T20I series against New Zealand. With the series in pocket, Salman Butt feels India should give opportunities to youngsters in the third and final T20I. He said,

“The next World Cup is in Australia and India will need additional options for that event. India has a number of youngsters who can be tried out over the next 10 months. Few of them can play in the last T20I (against New Zealand). They have won the series, so it is a perfect opportunity to try them out.”

The former cricketer also lauded Rohit Sharma as an attacking captain and a thinking cricketer. The T20 series is Rohit Sharma’s first as the full-time Indian T20I skipper. Salman said,

“Rohit Sharma is an attacking captain and a thinking cricketer. He is busy and is always looking to take wickets through his fielding and bowling changes.”

The third and final T20I between India and New Zealand will take place on Sunday, November 21 in Kolkata.