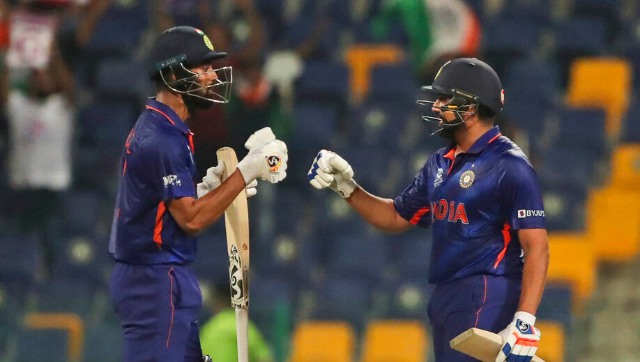 Rohit Sharma led Team India have registered another convincing win over New Zealand in the second T20I match. With this, they have sealed the series with one game to spare as well.

India won the toss and opted to bowl. While batting, both Martin Guptill and Daryl Mitchell stitched 48 runs within 5 overs. However, Indian bowlers soon tried to find their form and debutant Harshal Patel stole the limelight with 2 for 25 in his 4 overs spell. Alongside him, Ravichandran Ashwin too did well, conceding 19 runs and they successfully restricted the Kiwis within 153. Daryl Mitchell top-scored with 34.

A terrific bowling performance on debut 💪@HarshalPatel23 wins the Man of the Match award for his splendid spell of 2/25 👏👏#TeamIndia #INDvNZ @Paytm pic.twitter.com/BvRz4qmL5Z

While chasing, both KL Rahul and Rohit Sharma got off to a flying start, adding 117 runs for the opening wicket. Later, Venkatesh Iyer and Rishabh Pant took the team to the finish line with 2.4 overs in hand.

Harshal Patel, who won the Player of the Match award, said: “The match did run through. When you are in the process you just get engrossed. It will sink in and it has been a great game. I couldn’t have asked for a better debut. The progress is gradual and slow. For someone like me who is not exceptionally talented, I had to build my game from ground up. I made mistakes and then found things that I can and cannot do well.”

“It has been a great journey and has taught me many lessons which will hold me in good stead even after cricket. I feel you don’t need too many variations. You just need to know what works for you and need to package it well. I couldn’t bowl those yorkers and loopy slower ones in these conditions. The yorker is a delivery I would like to use and get better at. I have seen myself fall into shiny things so many times. It is another platform for me to come, perform and show my skills. Just want to do that and enjoy whatever comes my way.”

Rohit Sharma said: “Great effort from the entire unit. Wasn’t the easiest of conditions but the way we applied ourselves was amazing. We know their quality of batting, they played some good shots to start with. But I kept telling the boys that it is all about one wicket. But we showed great application and temperament to restrict them. The quality of the bench has been amazing. They have been performing consistently whenever they get the chance. It is important for me to give them the freedom. The external matters will take care of themselves. It is a young team and the guys haven’t played a lot of games.”

He continued: “It is important that the guys get time in the middle. It is early to think about changes in the next game. Whatever suits team India, we’ll do that. We need to make sure we look after the guys who are playing now. They haven’t played a lot either. For the guys who haven’t played, their time will come, there are a lot of T20s. Harshal has done it time and again, he is a very skilful bowler. Even in these conditions, he used the slower ball really well.”

Tim Southee said: “Credit to India, they pulled it back nicely after the first six overs. They played better cricket and didn’t give us a chance with the bat as well. It was wet for both teams and it was only slightly more in the second innings. We knew dew would be a factor, but India were too good on this day. We will now go to a new venue, a quick turnaround, and we’ll assess when we get to Kolkata.”