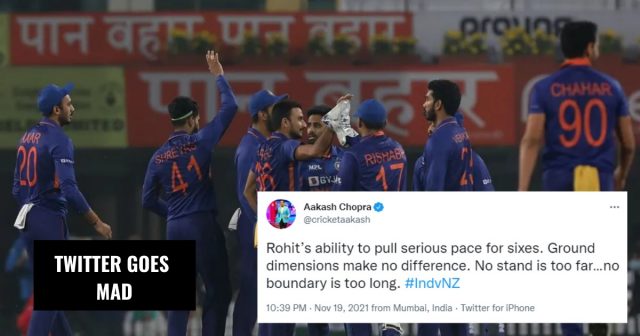 India beat New Zealand by seven wickets in the second T20I at Ranchi to seal the three-match series 2-0. It was Rishabh Pant who hit back to back sixes to win the game for his side after the Indian openers laid the platform once again. Rohit Sharma wins his maiden series as T20I captain of India. It is good start to their mission of winning the T20 World Cup 2022.

Set to chase 155 to win, KL Rahul (65) and Rohit Sharma (55) added a 117-run stand to lay the platform for their team. After both the openers were dismissed, Pant hit back to back sixes to win the game for his team to Jimmy Neesham. Venkatesh Iyer, playing his second game was unbeaten on 12. It was the fourth 100-run partnership between Rohit and Rahul. They batted splendidly together, something which Rahul even eluded to after the game. Barring Ti Southee’s three wickets, the other Kiwi bowlers were taken for runs by all the Indian batters.

It was a cumulative effort from all the Indian bowlers that kept the Kiwis to a manageable score. Making his T20I debut Harshal Patel took a couple of wickets. Deepak Chahar and Bhuvneshwar Kumar picked one each. India’s spin duo of Ravichandran Ashwin & Axar Patel took one each as well.

” It’s a great feeling playing for the country. I love the game and the ultimate goal for any player is to play for the country, it’s an honour, it’s a privilege and I’m not going to take it for granted. Rahul (Dravid) sir has always told me that once you are done with the preparations, you gotta go out there and enjoy the game. After 9-10 years of domestic cricket and on the back of a good IPL I’ve reached here, so it’s a satisfying moment for me” said Harshal on his T20I debut.

The Twitterverse, meanwhile, celebrated an Indian series win against a team that knocked them out of the T20 World Cup a few days ago.

So series win. Imp is the process. Good start for the @ImRo45 #RahulDravid combine.

Rohit’s ability to pull serious pace for sixes. Ground dimensions make no difference. No stand is too far…no boundary is too long. #IndvNZ

x 2⃣, and a one-handed classic six to end the game for good measure 💙 https://t.co/K0gvEIZzrj pic.twitter.com/nzcym5QGip

Pant completes win in gr8 style. Delightful chase, but the platform was set up by the bowlers, particularly R Ashwin and Harshal Patel who restricted NZ to 25-30 runs fewer than anticipated. Series in the bag allows Dravid and Rohit scope for experimentation in 3rd match

Who was your pick of the players for Team India in the 7-wicket win?#BelieveinBlue pic.twitter.com/CLuCwQo2zj

The third and the final T20I will be played in Kolkata on Sunday. (November 21). The two teams then play a two-match Test series with the first in Kanpur (Nov 25-29) and the second in Mumbai (Dec 3-7).