Indian skipper Rohit Sharma is leading his team currently in the second T20I in Ranchi. India are chasing a target of 154 to win the game and seal the series. Impressive performance from the Indian bowlers kept the Kiwis to a par score. Meanwhile, dew had already set in the game right from the first half making gripping the ball difficult for bowlers. The NZ batsmen also found it tough to score in the final overs.

In between the first innings, a die-hard Rohit Sharma fan breached the tight security at the JSCA International Stadium Complex. The moment was caught on the cameras and the picture of the die-hard fan worshipping his hero went viral instantly.

It was a cumulative effort from all the Indian bowlers that kept the Kiwis to a manageable score. Making his T20I debut Harshal patel took a couple of wickets. Deepak Chahar and Bhuvneshwar Kumar picked one each. India’s spin duo of Ravichandran Ashwin & Axar Patel took one each as well.

Fine performance with the ball from #TeamIndia! 👍 👌 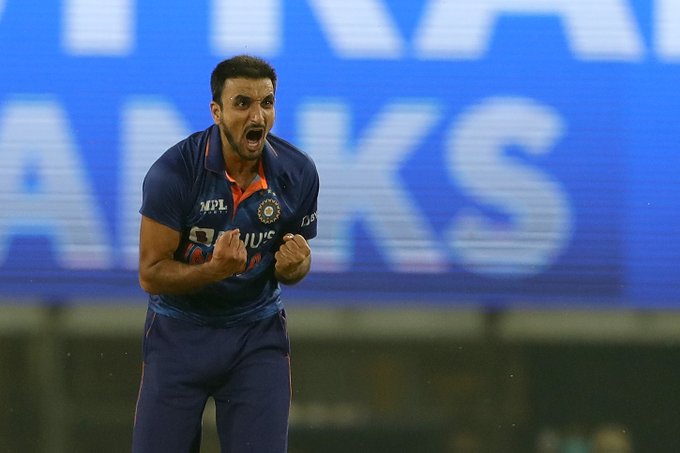 ” It’s a great feeling playing for the country. I love the game and the ultimate goal for any player is to play for the country, it’s an honour, it’s a privilege and I’m not going to take it for granted. Rahul (Dravid) sir has always told me that once you are done with the preparations, you gotta go out there and enjoy the game. After 9-10 years of domestic cricket and on the back of a good IPL I’ve reached here, so it’s a satisfying moment for me” said Harshal on his T20I debut.

Harshal took 32 wickets in IPL 2021 for Royal Challengers Bangalore to win the Purple Cap this season. He equalled Dwayne Bravo’s tally of 32 wickets in 2013 to create a record for his name.

Indian openers have started well and the team is looking good to win the match and the series.