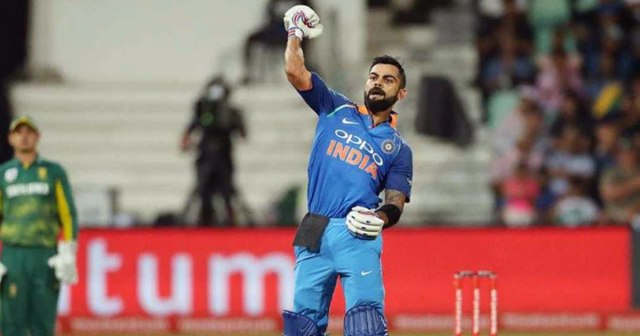 ‘Former’ India Captain Virat Kohli is all set to break some big records in the ODI series against South Africa. Kohli has an outstanding ODI record in South Africa, having scored 877 runs at an average of 87.70 in 15 innings.

Virat Kohli (5057 runs) is just nine runs away from being India’s all-time leading run scorer in away ODIs. Sachin Tendulkar currently holds the record with 5065 runs in 147 matches. With 4520 runs, Mahendra Singh Dhoni is third on the list.

Virat Kohli has scored 1287 runs against South Africa and is currently the eighth highest run-getter against them in ODIs. He has four hundreds and six fifties in just 27 matches, with a remarkable average of 64.35. If he scores 27 runs more, He will surpass Team India’s current head coach Rahul Dravid and BCCI President Sourav Ganguly, who have 1309 and 1313 runs, respectively. Sachin Tendulkar tops the list with 2001 runs, followed by Ricky Ponting, the former Australian captain, with 1879 runs.

Virat Kohli is currently ranked third among cricketers with the most international hundreds. It has been more than two years since Kohli last scored a century. Kohli has 70 hundreds in international cricket across all formats, and he can equal Ricky Ponting’s record of 71 centuries if he ends this century drought.

When India last played an ODI series in South Africa, Kohli amassed 558 runs in six innings. In that series, India won 5-1 with Kohli slamming three hundreds and one half-century.

India aims for a strong start in the post-Kohli era

Meanwhile, Team India will try to put the disappointment of losing the Test series behind and focus on the ODI matches. Due to unavailability of Rohit Sharma, KL Rahul will lead the side in the three-match ODI series.

#TeamIndia all set and raring to go for the 1st ODI 💪💪#SAvIND pic.twitter.com/rfIMTxVZ2q