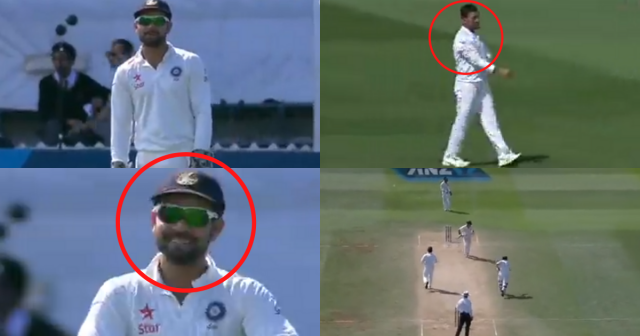 Virat Kohli is one of the finest batsmen in modern-day cricket and his consistency sets him apart from others. In the early stages of his international career, Virat used to bowl part-time as well. However, few people are aware that, in addition to batting and bowling, Kohli has also donned the wicket-keeping gloves, that too in international cricket.

A video clip has gone viral on social media in which the former India captain can be seen donning the wicketkeeping gloves. The video is from Wellington Test during India’s tour of New Zealand 2014. It’s worth noting that while Virat was keeping, the bowler was skipper MS Dhoni, the regular wicketkeeper of the side.

Actually, BJ Watling and Brendon McCullum had already added 300+ runs for the sixth wicket in New Zealand’s second innings and were on their way to creating a record partnership. None of the bowling options was working for the Indian skipper. So he himself decided to roll his arms and this is why Virat was assigned the wicketkeeping duties.

This didn’t last very long, as MS returned to the wicketkeeper’s position in the following over, and it was now Virat Kohli who was bowling. In that match, Virat bowled six overs for 13 runs at an economy rate of 2.16.

Everything was so beautiful when ms Dhoni was there I must say both were lucky 4 eachother b'coz of the respect they should towards eachother ❤️
@imVkohli pic.twitter.com/04qM82UHMm

When Virat Kohli kept wickets in an ODI match against Bangladesh

Virat Kohli also donned the wicketkeeping gloves in an ODI match against Bangladesh later in 2015. He had to do it during the last stages of Bangladesh’s innings because MS Dhoni had left the field for a toilet break.

Kohli also stated that keeping for that short while taught him that MS Dhoni’s job is very difficult since he has to focus on each and every ball while also adjusting the field placements.