India will lock horns with England in the summit clash of the ICC U19 World Cup, scheduled to take place in Antigua on Saturday (February 5). Ahead of the high-profile encounter, Virat Kohli interacted with the players to share his experience and motivate the cricketers.

Incidentally, Kohli was the skipper of the Indian side that won the 2008 ICC U19 World Cup. Under his leadership, the Indian colts defeated South Africa in the summit clash by 12 runs to emerge as the champions.

Virat Kohli shared insights on what it means to play a World Cup final. A couple of U19 cricketers took to their social media handles to upload stories and share their experiences of chatting with the former India captain.

Rajvardhan Hangargekar took to Instagram and stated that it was a good experience interacting with Virat Kohli. The youngster added that it will help him get better.

“It was really good to interact with you Virat Kohli bhaiyya. Learnt some important things about life and cricket from you which will help us in getting better in upcoming times,” stated Hangargekar on Instagram.

Another integral member of the side Kaushal Tambe revealed that the players got tips from the Greatest of All Time (GOAT) before the summit clash of the tournament.

“Some valuable tips from the GOAT before the final,” wrote Tambe. 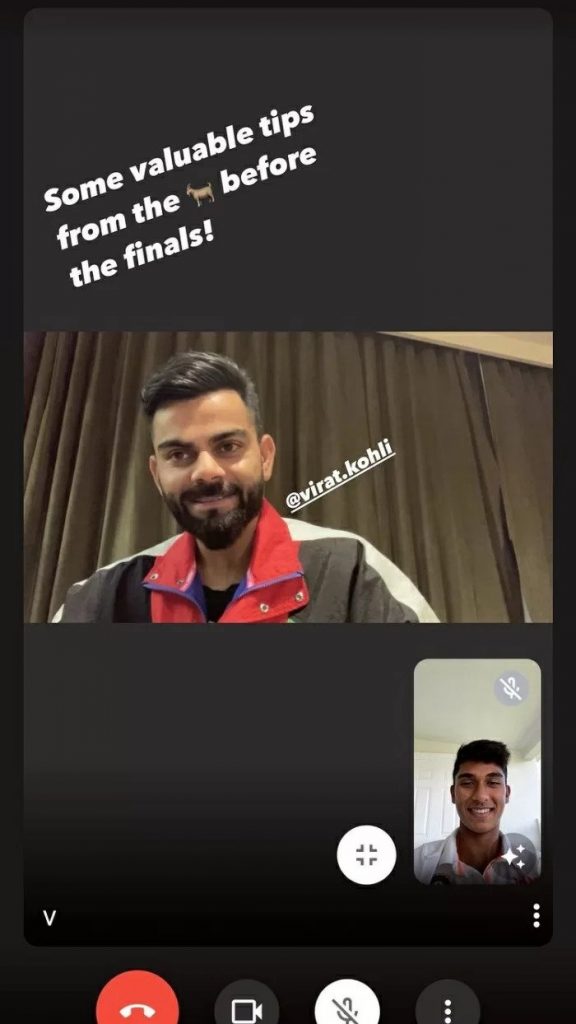 India U19 head coach Hrishikesh Kanitkar was also present listening intently to what one of the world’s greatest batters had to say.

India have literally dominated the competition, making it to the final four times in a row. They lost the final against Bangladesh two years back and will be desperate to go all the way this time around when they play England in the title clash.