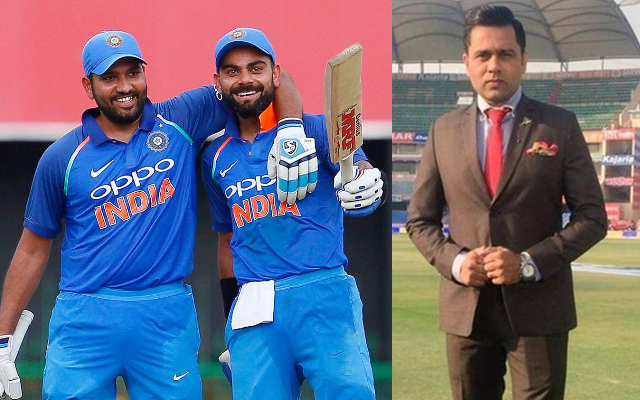 The tussle between India and Australia is about to begin in Australia but this time it’s going to be marginally tougher for the Indian side. As Virat Kohli is all set to miss three tests whereas Rohit Sharma will be missing the white-ball leg which is why the tour might just cause the Indians a lot many hindrances while trying to avenge the Australians at home.

Virat Kohli will be on paternity leave as his better half, Anushka Sharma as expecting their first kid whereas Rohit Sharma is given rest from the limited-overs leg to recuperate and be completely fit from an injury he sustained during the recently concluded IPL where Mumbai Indians avenged champions.

In all this former India opener Aakash Chopra has assessed who will India end up missing more going into the Australian tour. Whether it will be India’s skipper Virat Kohli or his white-ball deputy Rohit Sharma. Chopra compared both Virat and Rohit to the two eyes of a human, if one eye is missing then you will end up missing a lot in the vision likewise even for Team India, they will miss greater things even if one of the two is missing.

In his Facebook video, Aakash Chopra said, “They are the two eyes, whom will you miss more. You need both the eyes to see and if you remove one of the eyes, then it will definitely be a big miss. If you talk about Rohit in ODIs, these are Australian grounds where if he is not there, it is going to be very very difficult. The ball will have the pace and the bounce, you will miss his experience.”

Aakash Chopra also raised questions on how Rohit Sharma played the IPL final if he isn’t fit and if he is fit then why isn’t the white ball dominator not playing in the limited-overs fixtures against Australia.

In the end, Aakash Chopra provided his judgement that India will miss Virat Kohli a lot more than Rohit since he gives more importance to test cricket and by the looks of it Kohli’s record in Australia is impeccable to Rohit in test cricket which is why he will be a greater miss going forward.

“Although you are going to miss both of them equally, because I give more importance to Test cricket than white-ball cricket, especially if it is the Border-Gavaskar Trophy which you need to retain, then it will be very difficult without Kohli. So maybe Kohli will be missed a little more than Rohit Sharma,” Aakash Chopra further said.