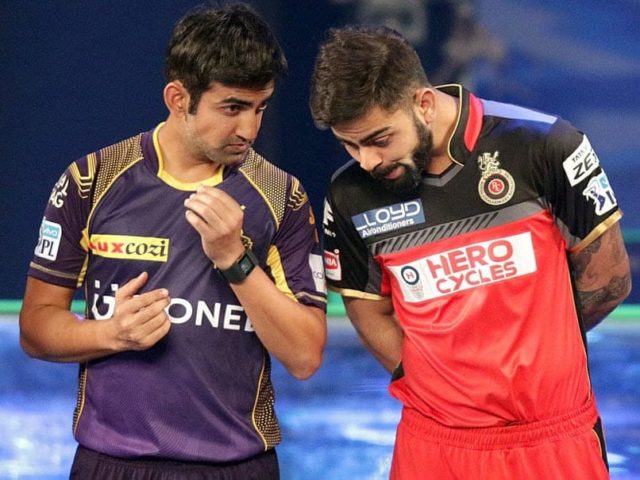 Gautam Gambhir has always been a cricketer who has spoken his heart. Whatever the situation, the former Indian left-hander has gone by his instincts and said what he thinks is right. With all the talk regarding how RCB would play in the IPL and about their batting-heavy lineup, Gambhir has said that Virat Kohli should have been involved a lot earlier if the RCB squad lacked balance before.

Speaking with Star Sports’ Cricket Connected, the former Indian batsman made this revelation. Bangalore have been struggling to find the perfect team combinations which have hurt their performances in the last couple of years.

The Royal Challengers have tried to solve the puzzle during the auction and will hope to put out a better in the UAE.

“The first thing is that Virat Kohli is the one who has been captaining RCB since 2016. So if the balance was not there earlier, then Virat Kohli should have got more involved,” Gambhir said during an interaction on Star Sports.

Also Read: Gautam Gambhir Names One Player To Watch Out For In IPL 2020

He further added that the Royal Challengers Bangalore looks a batting-heavy squad like it does every year. However, the wickets in Abu Dhabi and Dubai are not as flat as Chinnaswamy which will work in favour of the bowlers.

“I still feel that RCB look a little batting-heavy. But one thing that you will see a little different is that the bowlers will be happy because they will not have to play 7 matches at the Chinnaswamy Stadium. You will be playing in Dubai and Abu Dhabi which probably have bigger grounds, wickets are not as flat as Chinnaswamy. It is always difficult to judge the bowlers from Chinnaswamy’s point of view,” Gambhir said.

Gambhir also said that Chris Morris can be a key player in the side given that his all-round abilities add depth to the RCB unit. The South African all-rounder joined Bangalore from Delhi Capitals and will have to shoulder responsibilities for RCB.

“Chris Morris provides balance to the RCB squad, a quality all-rounder although he has not played much cricket. He can be a finisher as a batsman and can also give you 4 overs and bowl at the death.”

With Yuzvendra Chahal and Washington Sundar as their specialist spinner, Gautam Gambhir added that it will be interesting to see the four overseas players in the RCB lineup.

“They have Washington Sundar and Yuzvendra Chahal as well but it will have to be seen which 4 overseas players RCB picks in their XI,” Gambhir concluded saying.