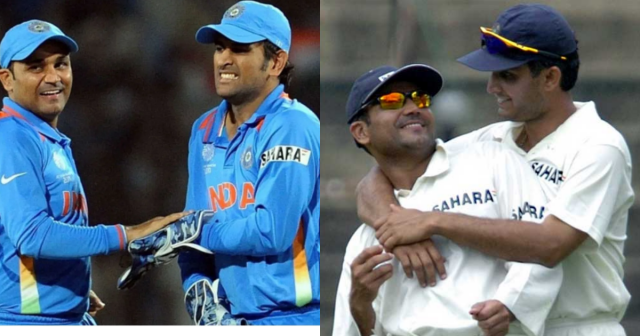 Former Indian cricketer Virender Sehwag has shared his thoughts on MS Dhoni and Sourav Ganguly and who among the two is a better captain, Sehag who played international cricket for nearly 15 years played under both these captains. He started under Ganguly and won the 200 World Cup along with Dhoni. He was also a part of the Indian squad that made the finals of the 2003 World Cup.

Yer again Virender Sehwag found himself choosing between the two Indian captains and he was at his wittiest best with his response. Ganguly made him an opener from a middle-order batsman and he was at his best under Dhoni playing some memorable knocks.

“They were both good captains but the best I thought was Sourav Ganguly. Because Ganguly built a team from scratch where he picked new and promising players and rebuilt the team and taught India to win abroad. We drew Test series, learnt to win Test matches,” Sehwag said on the YouTube show ’13 Jawab Nahi’ with RJ Raunak.

Virender Sehwag further said that the team under MS Dhoni was a byproduct of Sourav Ganguly. He said that Dhoni did a good job to take them forward and produce results for the team.

“MS Dhoni had the advantage of a developed team so when he became captain, it wasn’t too difficult for him to prepare a new team. Hence, both were good, but in my opinion, Ganguly was the best captain,” Sehwag added.

There were reports of rift between Sehwag and Dhoni during the fag end of Dhoni’s career. However, both the Indian cricketers and close sources denied such reports. Recently MS Dhoni was appointed as Team India’s mentor for the upcoming T20 World Cup and Sourav Ganguly welcomed him with open arms saying this was a good move.

“It’s just to help the side in the World Cup. He has a good record in the T20 format for India and the Chennai Super Kings. There has been a lot of thought behind it. We discussed a lot and then decided to have him on board. We haven’t won an ICC trophy since 2013,” Ganguly told The Telegraph.