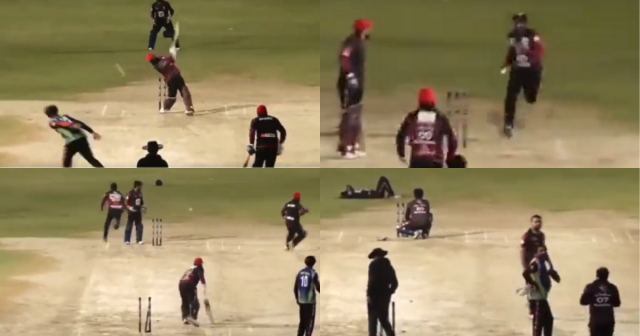 Cricket is known as the “game of uncertainties”. The best example of this can be seen in a video that has recently gone viral on social media. The clip is from the Al-Wakeel Cricket League played in Karachi, Pakistan.

The hilarious incident occurred during the game between Audionic and AutoMall. The Automall team was chasing a total of 155 runs in 20 overs. The game had come to a stage where they required to score 5 runs off the final ball to win.

This meant that the batter had to hit a six to seal the victory for his team. A four would have tied the game. However, in this match, the Automall side won without hitting a boundary. Here’s how:

The batter tried to smash the last ball out of the park but wasn’t able to make a proper connection. The ball went straight to the off-side fielder, who sprinted with the ball in his hands and removed the stumps on the non-striker’s end.

However, the batter was inside the crease and then the fielder tried to run out the batter who was running towards the striker’s end.

In the attempt to do that, he threw the ball towards the stumps, but missed by a small margin. The ball went past the wicketkeeper and started going towards the boundary line. By the time the ball came back, the batters had already completed the required 5 runs, courtesy of overthrows.

Commentators in shock by the climax of the match

The fielding team was unable to comprehend what had just happened on the field. Even the commentators were stunned by the way the match ended. “Oh my God, Oh my God”, they exclaimed on-air.