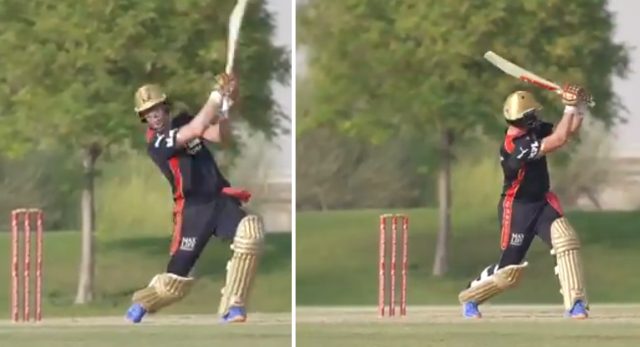 The Royal Challengers Bangalore (RCB) are gearing up for the second phase of the Indian Premier League 2021, which starts on September 19 in the UAE. With the majority of their players out of quarantine, the franchise played an intra-squad match to get into the groove.

The RCB squad was divided into two teams, RCB A and RCB B, with Harshal Patel and Devdutt Padikkal leading the sides respectively. RCB A won the toss and opted to bat first. They scored 212-4 at the end of the first innings. AB de Villiers and Mohammad Azharudeen put together a solid stand for the second wicket. AB De Villiers slammed 104 runs off 46 deliveries while Azharudren scored 66 runs.

Reflecting on his knock at the end of the first innings, AB De Villiers said,

“When we arrived and I got out off the bus, I thought it’s crazy that we’re trying to play a cricket game in the middle of the day. Luckily the breeze came up, I told Azharudeen that it’s much better now and the pitch will get flatter. We had fun out there, I’m pleased with the runs on the board. It was very stretchy for the first 20 balls out there.”

Chasing the target of 212, RCB A got off to a brilliant start courtesy of their openers Devdutt Padikkal and KS Bharat. Padikkal scored 36 off 21 balls, while the young wicket-keeper batsman, KS Bharat, scored 96 runs to set the platform for the chase. The match went down to the wire, with Devdutt Padikkal’s team emerging as winners as they chased down the target in the last over.