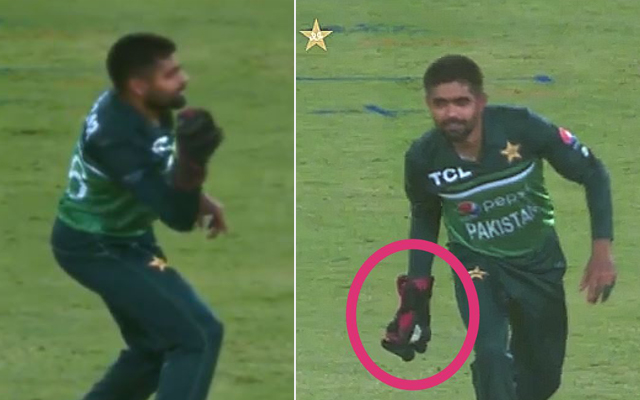 The Pakistan cricket team faced a five-run penalty after skipper Babar Azam dons wicket-keeper’s gloves to field a ball, on Friday in the second ODI against West Indies at the Multan Cricket Ground. The hosts won the match by 120 runs to take an unassailable 2-0 lead in the three-match series.

The Babar Azam incident took place during the 29th over of the second innings. Mohammad Nawaz bowled an in-drifter to Alzarri Joseph. The West Indies cricketer tried to defend the ball but got an inside edge on it. Babar Azam, who was at the square leg, fielded the ball wearing wicket-keeper’s gloves.

The Pakistan team had to face a penalty of five runs. According to Law 28.1 Protective Equipment, “No fielder other than the wicket-keeper shall be permitted to wear gloves or external leg guards. In addition, protection for the hand or fingers may be worn only with the consent of the umpires.”

28.1 – No fielder other than the wicket-keeper shall be permitted to wear gloves or external leg guards. #PakvWI pic.twitter.com/WPWf1QeZcP

However, the penalty runs did not impact the match as Pakistan won comfortably by 120 runs. West Indies were bowled out for 155 runs chasing 275 in the second innings. Mohammad Nawaz picked four wickets, while Mohammad Wasim Jr took three wickets. Earlier in the match, Imam-ul-Haq slammed 72 runs, while Babar Azam scored 77 to take Pakistan to 275 runs in the first innings.

Pakistan skipper Babar Azam keeps on toppling records at the International level. On Friday, he slammed 77 off 93 balls in the second ODI of the series against West Indies. This was his ninth-consecutive fifty-plus score in men’s international matches, the longest streak for any batter.

In the last match, Babar broke the record to become the fastest to score 1000 runs in the ODI as a captain. He surpassed Virat Kohli to register the record on his name, scoring 1000 runs in 13 innings.

The third and final ODI between Pakistan and West Indies will take place on Sunday, June 12 in Multan.