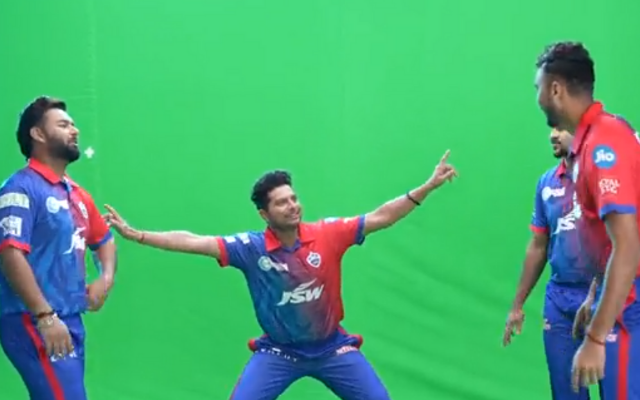 DC skipper Rishabh Pant assumed command while dancing also. Pant instructed Kuldeep Yadav, Shardul Thakur, and Axar Patel on how to do the Bhangra dance. He was spotted teaching the three players some new moves. Pant breezed through the job, however, Axar struggled with the Bhangra.

A person from behind the cameras invites the players to start doing the Bhangra in a video uploaded by the Delhi-based franchise, and Axar responds by stating, “Bhangra aana to chahiye na!” (To do it, I should know how to perform Bhangra!)”

“Dono hath upar, bohot tagdam karne ki zarurat nahi hai Aise Bhi Karega to chalega”((Put both your hands up in the air and no need to complicate it, you can just do like this and make to work), Rishabh Pant says, and the players begin to dance around.

Delhi Capitals looking for a win against KKR

Off the field, the boys appear to be having a wonderful time, but they haven’t been having much fun on it in recent days. Two of DC’s past three games have ended in defeat, and their most recent encounter against the Rajasthan Royals was a complete disaster. Pant’s conduct during the game got him into problems, and he was fined 100% of his match fee after a contentious no-ball judgement.

He also sent Pravin Amre onto the field to argue with the umpires, and Amre received a one-match suspension as a result. Delhi Capitals were set a target of 223 runs by Rajasthan Royals.

Rovman Powell hammered Obed McCoy for three back-to-back sixes in the last over to get them close to winning, but the all-rounder lost his touch after the action was delayed due to the no-ball issue. Powell was unable to strike on the remaining deliveries and was bowled out, allowing RR to win the gruelling competition. In the 41st game of IPL 2022, DC will face the Kolkata Knight Riders.