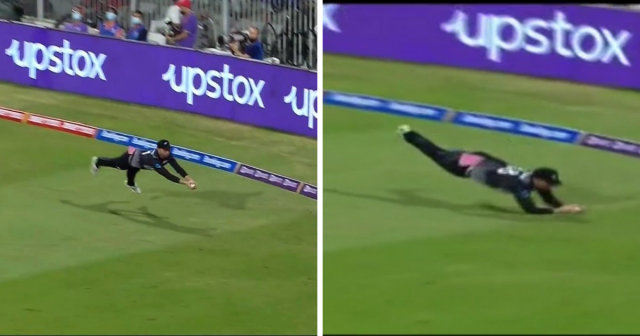 New Zealand’s Devon Conway pulled off what can be the best catch of the ICC T20 World Cup 2021 against Pakistan tonight in Sharjah. However, the Kiwis succumbed to defeat by 5 wickets to start their campaign on a losing note.

The incident took place in the 11th over when Conway ran a couple of meters and then jumped to his left to pull off a freak catch. Mohammad Hafeez shuffled out to loft the spinner over long-off and he looked in decent control until the execution part.

The ball flew more off the inside half of the bat to the left of Conway and the Wellington man has plucked it out of thin air while diving full length to his left. Devon Conway was completely in the air when he pulled off the catch.

Pakistan make it two in two to start their campaign

The Men in Greens once again pulled off a perfect run chase to continue their winning spree after beating India by 10 wickets. Chasing 135 runs, Babar Azam and Mohammad Rizwan started off decently, but it wasn’t a flier by any stretch. However, Fakhar Zaman just couldn’t get going.

Ish Sodhi with a couple of his off-breaks did indeed bring about a scare to pull New Zealand back in the game. However, the difference though were those two poor slower deliveries from Tim Southee, in the slot, for Asif Ali to smoke away, and seal it. Veteran all-rounder Shoaib Malik was chipped in with some match-winning innings.

Speaking at the end of the game, Pakistan captain Babar Azam vouched to carry the winning momentum in the next game. He said:

“Feels great to win and we’ll look to carry forward the confidence. The spinners started off brilliantly, and Haris and Shaheen carried it through. I would like to compliment our fielding, that has carried us through here. I thought we gave 10 runs too many. But this is cricket and it happens. While batting, there were wickets early on and we needed a partnership. Malik showed experience and Asif Ali contributed too. Every match is crucial. There is no easy match. We’ll look to play it day by day and game by game.”