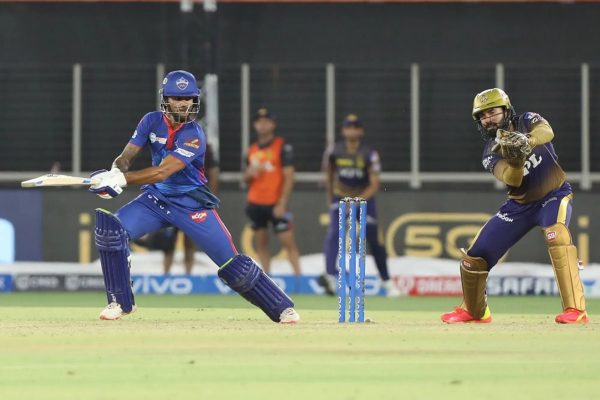 Delhi Capitals handsomely defeated Kolkata Knight Riders by seven wickets with 21 balls to spare at the Narendra Modi Stadium in Ahmedabad. Meanwhile, during the game, Delhi opener Shikhar Dhawan and Kolkata wicket-keeper Dinesh Karthik were involved in a funny byplay as Delhi were cruising through the run chase.

Kolkata Knight Riders had a steady platform at one stage with the score reading 69/1 in the 10th over thanks to Shubhman Gill getting his side a good start. But all that was wasted within the space of a few overs. The mini-collapse crippled the Knight Riders and if not for birthday boy Andre Russell’s late blitz, they would have been embarrassed. 42 came off the last three overs to guide Kolkata to 154 runs but Delhi Capitals were otherwise mostly on point with their bowling tactics and field placements.

Chasing a moderate total, Prithvi Shaw set the run chase on fire hitting six fours in an over off Shivam Mavi in the first over. Since then, Prithvi was all over the heist while Shikhar Dhawan played a second fiddle. The youngster just blew KKR away with some really attractive strokeplay, punishing both pace and spin alike. Eoin Morgan’s tactics were under the scanner considering he brought Pat Cummins so late despite Shaw’s problem against short pitch deliveries.

Having said that, full credit to Shikhar Dhawan and Prithvi Shaw to set the platform adding 132 runs for the first wicket before Marcus Stoinis took the side home. Meanwhile, Dhawan was seen engaged in a funny banter with Dinesh Karthik, whom he knew from 2004 during the U19 days.

The incident took place on the 12th over. It was a back-of-a-length delivery from Varun Chakravarthy spinning down the leg. Shikhar Dhawan failed to clip it away and Dinesh Karthik whipped the bails in the flash. Although Dhawan lost his composure but his foot never left the ground. Soon after the appeal, a healthy banter unfolded between Dhawan and Karthik. The cricketer from Tamil Nadu animatedly said something to Dhawan who jumped on his knee before both of them sharing a laugh.