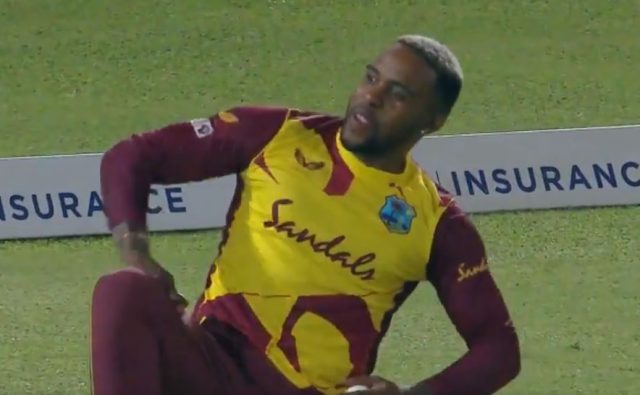 During the second T20I between West Indies and Australia, Fabian Allen did a ‘thigh-five’ after taking a catch. The celebration is a trademark of Indian opener Shikhar Dhawan.

The 26-year-old Jamaican is known for his improvised antics on the field. He had another opportunity in the recent T20I series against Australia. While fielding at deep mid-wicket, Fabian Allen took a clean catch of Mitchell Marsh. It was a very impactful moment in the game, as Marsh had just reached his fifty.

After holding on to the catch, he paid a ‘tribute’ of sorts to Shikhar Dhawan. Fabian Allen did a ‘thigh-five’, something which he might have picked during his stint in the IPL. While Dhawan plays for Delhi Capitals, Allen is part of the Punjab Kings squadron.

After being put in to bat first, West Indies got off to a slow start. They lost three wickets by the eight over and they had barely touched the 60-run mark. In a surprise move, Dwayne Bravo was promoted at No.5 and he forged a game-changing partnership with Shimron Hetmyer. While the latter reached his fifty, Bravo played second fiddle before taking over. Andre Russell then came in and played a quickfire cameo which took West Indies to 196.

It was always going to be a tough chase and Australia followed the same template set by Windies. In the Aussies case however, none of the batsmen apart from Mitchell Marsh had a telling contribution. In a chase as steep as this, it was never going to be enough. Although Fabian didn’t pick up any wickets, he bowled an economical spell while picking up Marsh’s catch that prompted the ‘thigh-five’ celebration.