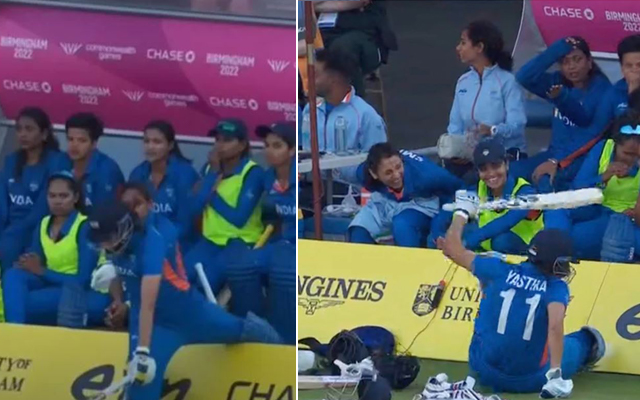 The Indian women’s cricket team won the silver medal at the 2022 Commonwealth Games on Sunday, August 8. They lost to Australia in the finals of the competition in a thrilling encounter by nine runs at the Edgbaston Stadium in Birmingham. The final moments of the match witnessed tense scenes in both camps. However, a moment of laughter surrounded the Indian camp when Yastika Bhatia fell over an advertising board.

Chasing 162 runs, Team India was 145 for the loss of six wickets in 18 overs. On the first delivery of the nineteenth over, Radha Yadav was run-out by Grace Harris for one run, pushing India into more trouble. Wicket-keeper batter Yastika Bhatia walked out to bat after Radha Yadav’s dismissal. However, while walking out of the Indian dugout, the batter stumbled over the advertising board.

Yastika Bhatia fell down, which had her teammates burst into laughter. Indian skipper Harmanpreet Kaur too could not resist herself, as the entire dugout started laughing. The incident was caught on camera and is being shared on social media by the fans.

Yastika Bhatia was not in the starting XI for the Indian team in the 2022 Commonwealth Games finals. However, wicket-keeper Taniya Bharia was hit on the back of her head during the first innings. The ball deflected off her gloves during the first innings and hit her. Yastika came into the XI, as Taniya’s concussion substitute in the match.

Team India endured a nine runs loss against Australia in the 2022 Commonwealth Games finals on Sunday in Birmingham. They were in a good position with 118 runs on the board for the loss of two wickets. However, the batting collapsed after Jemimah Rodrigues’ dismissal.

Indian batters could not handle the pressure in the death overs and fell in quick succession. They got all out for 152 runs in the second innings. The Harmanpreet Kaur-led team won the Silver Medal at the 2022 Commonwealth Games, as they ended as the runners-up.