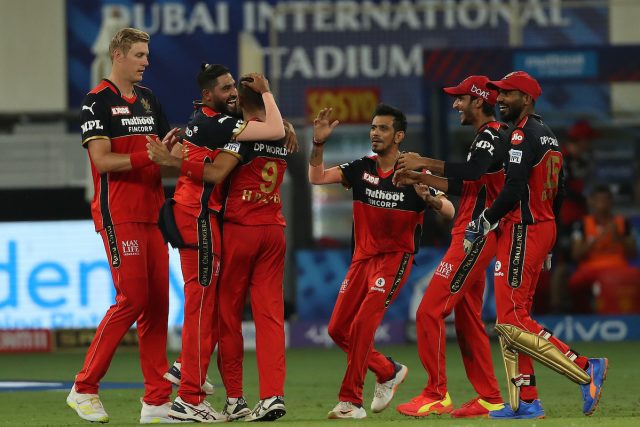 Harshal Patel extended his lead at the top of the highest wicket-takers list with a hattrick against defending champions Mumbai Indians in Dubai. Riding on Harshal’s superb show, RCB bowled out Mumbai Indians for 111 runs to win the match by 54 runs.

The incident took place in the 17th over of the match. Harshal Patel got Hardik Pandya out in the first delivery before dismissing Kieron Pollard and Rahul Chahar in the next two balls to complete his hattrick within the first half of the over.

This is the first hattrick of the season and Harshal Patel now has 23 wickets under his belt from 10 matches with the best figures of 5/27.

RCB end their losing streak in the UAE

Asked to bat first, RCB captain Virat Kohli put the side on top with an outstanding half-century before Glenn Maxwell ran the show with his 360 degrees hitting. The Aussie all-rounder smacked 56 off 37 balls including six boundaries and three sixes to guide RCB to 165 runs, which in the end proved too much for Mumbai Indians.

Harshal Patel now has a fifer and a hattrick against MI in the same season. 🔥🔥🔥

The defending champions got off to a brilliant start courtesy of Rohit Sharma and Quinton de Kock but once they were out, Mumbai middle-order crumbled. Glenn Maxwell gave the initial breakthroughs before Harshal Patel ran down the Mumbai batting with a four-wicket haul.

With this victory, RCB now have 12 points from 10 matches to sit third in the points table after Delhi Capitals and Chennai Super Kings.