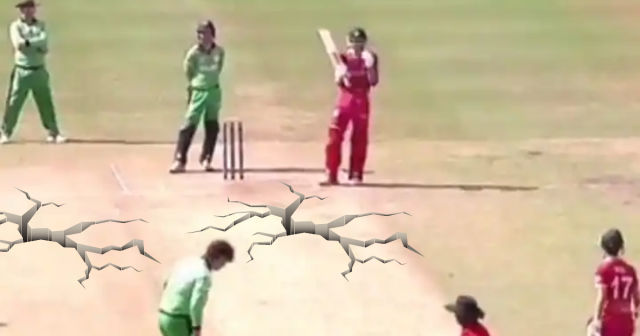 An earthquake was felt during the Under 19 World Cup match between Ireland and Zimbabwe on Saturday. Journalist Peter Della Penna posted a video of the incident on Twitter.

In the video it can be seen that as Ireland’s Matthew Humphreys was bowling the fifth delivery of the sixth over, the camera capturing the action began to tremble aggressively. However the game was not stopped, and Humphreys continued to bowl his over.

“We are, I believe, having an earthquake right now in the box. We are indeed having an earthquake, I’ve never experienced that before. It felt like not just a train going by behind us, but the entire Queen’s Park Oval media centre rocked.”, said the commentator on-air.

Earthquake at Queen's Park Oval during U19 World Cup match between @cricketireland and @ZimCricketv! Ground shook for approximately 20 seconds during sixth over of play. @CricketBadge and @NikUttam just roll with it like a duck to water! pic.twitter.com/kiWCzhewro

However the Ireland skipper Tim Tector stated that the players didn’t even realise that an earthquake had struck. “We didn’t know anything happened. We were on the grass and it probably did not translate to us. It was 5.2, it was pretty big but, no, we did not hear anything during the game”, he said.

This earthquake’s vibrations lasted around 20 seconds and it had a Richter scale reading of 5.2, according to reports. There were no injuries recorded due to the earthquake.

Ireland U-19 enter the Plate Final

Meanwhile, Ireland U-19 thrashed Zimbabwe by 8 wickets in the match. Zimbabwe won the toss and opted to bat. However they could manage just 166 runs in their innings. Ireland easily chased down the score, thanks to half-centuries from opener Jack Dickson and skipper Tim Tector. Ireland’s seamer Muzamil Sherzad also took 5 wickets in the first innings.

Ireland march into the Plate final with a comprehensive eight-wicket victory over Zimbabwe 🎉#IREvZIM | #U19CWC pic.twitter.com/9b8Je1CJeg

As a result of this victory, Ireland Under-19s will now automatically qualify for the next Under-19 World Cup in 2024. On Monday, the Irish team will face UAE in the Plate Final.