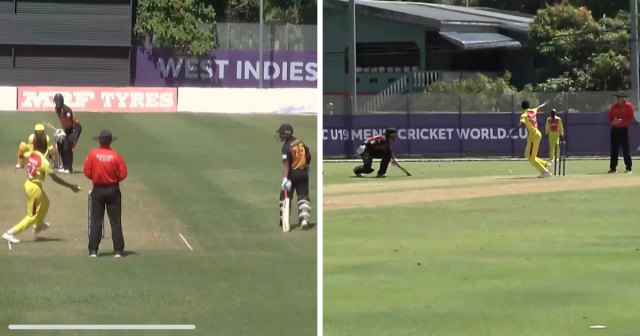 Uganda Cricket Team player Joseph Baguma has once again ignited the ‘spirit of cricket;’ debate by mankading the non-striker in a U-19 World Cup game on Friday. Going by the popular perception, Mankading has been considered against the spirit of the game.

Meanwhile, the incident took place in the 16th over of the Papua New Guinea innings, when the non-striker John Kariko had backed up too far at the non-striker’s end. And the bowler, Joseph Baguma indulged in the act, and Kariko was declared out by the umpires.

Meanwhile, the turn of events once again stirred mixed reactions from the cricketing fraternity. Yuvraj Singh and Tabraiz Shamsi had differing views on the matter as well.

“Nothing wrong with this if the batsman was out of his crease before the ball was bowled 🥱 ….bowlers get penalised even if they overstep by a millimeter by mistake and a free hit is given so batsmen should stay behind the crease too :),” Shamsi wrote.

Meanwhile, the Uganda side prevailed over PNG. Batting first, the Uganda U19 side posted a total of 123 on the board, with Cyrus Kakuru top-scoring with a superb 65 off 59 deliveries.

In reply, the Papua New Guinea side was bowled out for just 88 runs. Juma Miyaji was the pick of the bowlers, and scalped 4 wickets in his 9 overs and gave away only 29 runs. Joseph Baguma and Matthew Musinguzi also chipped in with 5 wickets between them as well.