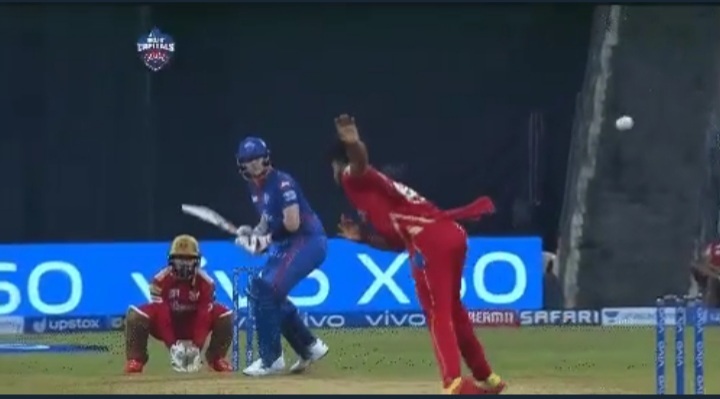 Jalaj Saxena surprised Steve Smith when the ball slipped out of his hand at the last moment while he was about to deliver the ball during the DC and PBKS match in IPL 2021. The Delhi Capitals spinner wasn’t able to grip the ball properly because of the dew at the Wankhede Stadium.

Saxena ended up delivering the ball over the stumps at the non-striker’s end while Smith was searching the ball. It certainly wasn’t cricket of the highest order as Saxena looked embarrassed while the ball slipped out of his hand.

It was a comical moment in the match as for a brief moment nobody had a clue where the ball had gone. The batsman initially thought that Saxena has flighted the ball and even used his feet to play it down the ground. He soon realised that Jalaj Saxena had made a mess of it but was still trying to hit the ball which amused his batting partner Dhawan.

Talking about the match the Delhi Capitals are currently well placed 106 for 2 in the 11th over. While chasing a target of 196, Shikhar Dhawan is currently leading the charge with the bat and is currently 64 from 37 balls. He is joined by Delhi Capitals skipper Rishabh Pant who will be aiming to contribute and take his side home.

Earlier in the match courtesy of a brilliant knock by Mayank Agarwal, Punjab Kings managed to post a competitive total of 196 on the board. On his birthday KL Rahul also scored yet another fifty in IPL 2021.

Also Read: Watch: Shubman Gill Falls To A Ripper Of A Catch From Dan Christian Against RCB