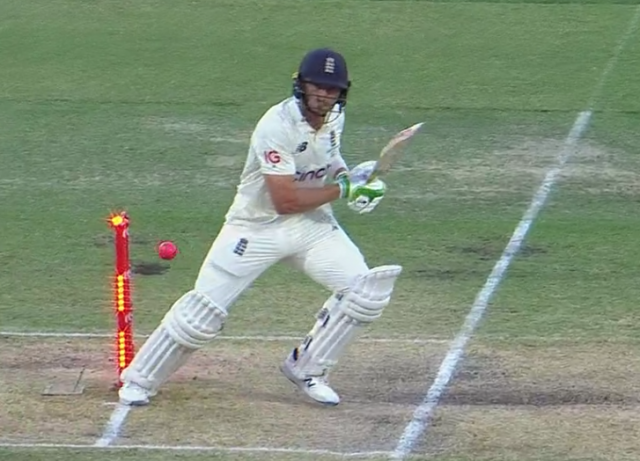 England wicket-keeper batter Jos Buttler’s outstanding 207-ball vigil came to an end when he was out hit wicket off a Jhye Richardson delivery in the final session of the pink-ball Test in Adelaide. Until then, Buttler had kept England’s hope alive in what was considered to be a losing cause on the final day of the Test match.

The visitors came out on day 5 at 82/4 with an entire day to play to save the Test match. Not many gave England a chance but Jos Buttler had other plans in mind. The English wicket-keeper batsman, who had a lean patch with the bat until this innings, almost pulled off an AB de Villiers-kind blockage to save the Test match.

With only an hour and a half left for the closure of the day’s play, Buttler got out in the unluckiest manner possible and along with it sank England’s chances, who were eventually bundled for 192 runs.

That ball banged in on a back of a length and Jos Buttler tapped it on the head off the back foot, but he was standing too deep in his crease, and unfortunately managed to trod on his stumps. He nearly went for the run, but then looked back only to see the mess he’s made.

We thought we’d seen everything, with Ollie Robinson bowling off-break, but this is something we weren’t ready to see.

What a way to end an epic innings! 😲

Jos Buttler almost batted for 35 overs, the longest he has in red-ball cricket to almost do the impossible for England but didn’t had the luck in his side.

England crumbled soon after Jos Buttler’s departure as Jhye Richardson cleaned up the tail with his first five-wicket haul in Test cricket. The visitors currently trail 2-0 in the five-match series.