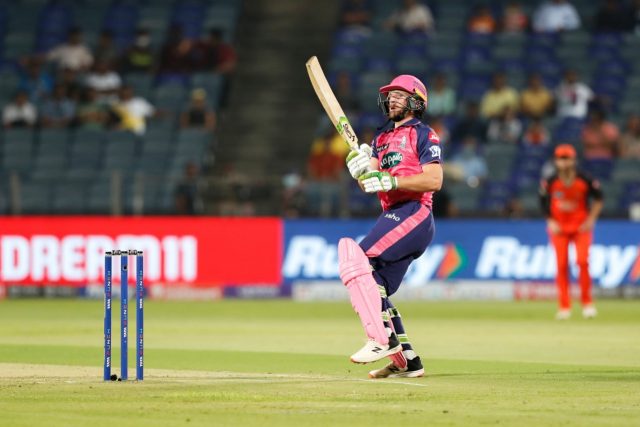 The Rajasthan Royals are playing against Sunrisers Hyderabad in their opening clash of Indian Premier League 2022 at the MCA Stadium in Pune. The Sanju Samson-led team has got off to a brilliant start.

The openers, Jos Buttler and Yashasvi Jaiswal put on a fifty runs partnership on the board in quick time. Buttler was given an early reprieve in the very first over when he was caught at the first slip off Bhuvaneshwar Kumar’s bowling. However, it was a no-ball, as the bowler had overstepped.

Buttler utilized the opportunity perfectly. He turned to the aggressive style of play, taking on the Sunrisers Hyderabad bowlers. A ridiculous six by him in the fourth over left the fans amazed.

Umran Malik bowled a length delivery, speeding it at around 143kmps. Buttler shuffled across to ramp it straight over the wicket-keeper’s head.

Interestingly, Jos Buttler got another life at the crease on the next delivery. He was dropped by Abdul Samad at slips. Anyways the catch would not have mattered as Umran Malik had overstepped. Buttler tried to hit a back of a length outside ball towards the off-side. However, it took a thick outside edge and flew to Samad, who dropped it.

Rajasthan Royals get off to a flyer against Sunrisers Hyderabad

The Rajasthan Royals openers, Jos Buttler and Yashasvi Jaiswal have set a good platform for the team to get a big score against Sunrisers Hyderabad at the MCA Stadium. Jaiswal slammed 20 runs off 16 balls, including two boundaries and a six, before getting dismissed.

Skipper Sanju Samson came to the crease after the ball of Jaiswal’s wicket. The wicket-keeper batter has also taken the aggressive route. Meanwhile, Jos Buttler was dismissed for 35 runs off 28 balls, including three sixes and as many boundaries. The Rajasthan Royals are 75 for two down in 8 overs.