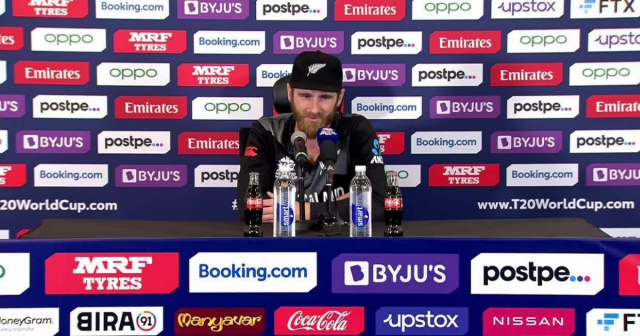 By an eight-wicket margin, Australia comfortably defeated New Zealand in the T20 World Cup final on Sunday. Kiwi Skipper Kane Williamson addressed the media after the match and was asked various interesting questions from the reporters.

The 2015 ODI World Cup Final saw New Zealand lose against Australia. They were on the wrong end of perhaps the greatest ODI match of all time in the 2019 World Cup final against England. Again here in the T20 world cup, they were defeated by their trans-Tasman rivals, Australia.

When a reporter asked about these three World Cup final defeats, Williamson responded, “And the Test championship final?” referring to the team’s victory over India in the inaugural World Test Championship final earlier this year.

Kane Williamson said that he’s proud of his team and the way they have performed throughout the tournament. Kane also commented on the high level of competition in a huge tournament like the T20 World Cup, emphasising the unpredictability of finals.

“You sign up to play the game, and you win and you lose, and these are things that can happen on any day. You know, if you look at the campaign on a whole, which we do, and the type of cricket that we have been able to play, I can say that we are very proud of our efforts throughout this period of time.”, said Williamson.

When Williamson went down to speak to the media, he could hear the Australian players shouting and dancing to the song ‘Freed from Desire’ in the adjacent room. Kane Williamson lauded his opponents for their performance on the big final.

“Australia played really, really well, and you can hear them celebrating next door, and rightly so,” said Kane Williamson.

The Australia cricketers were thrilled after the victory, and it reflected in their celebrations. In one of the videos released by ICC, the Aussies were seen executing a one-of-a-kind celebration. Matthew Wade took off his shoe, poured some beer into it, and then drank it. Many other players, including skipper Aaron Finch and Marcus Stoinis, also joined in on the unique style of celebrating.