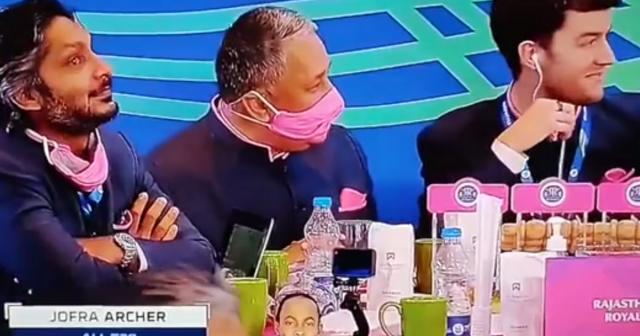 One of the most perplexing signings during IPL 2022 auctions was Mumbai Indians paying INR 8 Crores to England Pacer Jofra Archer. Mumbai Indians, Rajasthan Royals and Sunrisers Hyderabad- all participated in the bidding war for Archer who had set his base price at 2 Crores.

After MI’s 6 crore bid, Rajasthan had opted out. However, Kumar Sangakkara, Rajasthan Royals’ director of cricket operations, was caught on camera attempting to get other franchises to bid higher for Archer in order to make life difficult for the Mumbai Indians. The bid for Archer did increase as Sunrisers Hyderabad entered, but eventually the pacer went to Mumbai.

Sanga was trying to convince other teams to increase the bid 😏 pic.twitter.com/H6GRKU1Myk

When Jofra Archer’s name was called by the auctioneer Charu Sharma, RR had only acquired 12 players and had 9.55 Cr remaining. Mumbai Indians had bought the same no. of players but 23.70 crores were left in their purse. This enabled MI to go all-in for England’s speedster.

Due to injury concerns, Archer is unlikely to play in IPL 2022. The 26-year-old is expected to make a comeback in June. MI fans are eagerly waiting to see the Bumrah-Archer duo in action.

“Jofra has been a player Mahela gave his first professional debut to and since then we have been thinking about them as a pair. So happy that we got them together. Although he is going to play next year, we are very happy to have Jofra and Bumrah make a lethal pair for our bowling attack.”, Mumbai Indians owner Akash Ambani said.

After being signed by MI, Archer took to Twitter and posted the “two eyes” emoji.