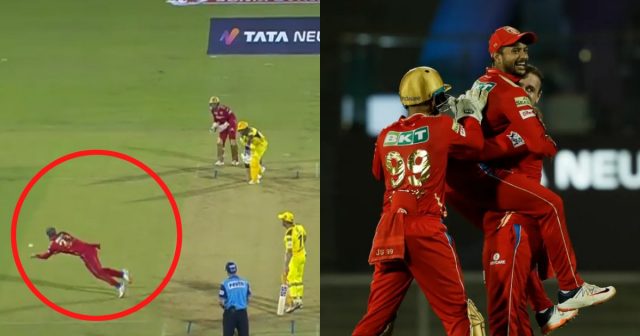 After a superb effort with the bat, Punjab Kings (PBKS) all-rounder Liam Livingstone also chipped in with a couple of wickets against Chennai Super Kings (CSK) at the Brabourne Stadium. He picked up two wickets of two deliveries to almost put the defending champions on the backfoot.

Rabada drew the first blood dismissing Robin Uthappa while Vaibhav got the better of Ruturaj Gaikwad and Moeen Ali to have CSK at 22/3 before Arshdeep Singh dismissed Ravindra Jadeja to reduce the four-time IPL champion at 23/4.

It was then Odean Smith’s turn, who bowled a well-time bouncer to catch Ambati Rayudu by surprise before debutant Jitesh Sharma produced a superb catch diving to his right.

Punjab continued to chip in with wickets before Liam Livingstone dismissed two batters of two consecutive deliveries in the 15th over. After dismissing Shivam Dube in the penultimate delivery, Livingstone produced a stunning effort to dismiss Dwayne Bravo for a golden duck.

It was a leg-break that was pushed through flat on a length at 98kph by Liam Livingstone. The ball pitched around the off stump and Bravo got forward to defend, but it pops up in the air. It looked to go well wide of Livingstone to his left but he dives across and snatches it with both hands.