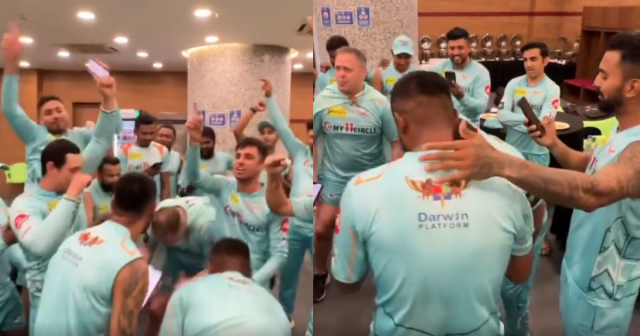 Lucknow Super Giants defeated Delhi Capitals by 6 wickets in Match 15 of IPL 2022. This completed a hat-trick of victories for the Lucknow franchise. With 3 wins out of 4 games, they are now placed at the second spot in the Points Table.

LSG shared a video on their Instagram handle where after the victory against Delhi, the players were seen celebrating in the dressing room. They were singing and dancing to a special song called ‘Sweet Super Giants’. This was their own version of the song- ‘Sweet Caroline’ by Neil Diamond.

Talking about the match, LSG skipper KL Rahul won the toss and opted to field. DC opener Prithvi Shaw looked in great touch. He smashed 61 runs off 34 balls. His innings consisted of 9 fours and 2 sixes.

In the final over, Lucknow needed just 5 runs. The task seemed easy. But a wicket and a dot ball in the first two deliveries, kept Delhi’s hopes alive. Ice-cool Ayush Badoni then smashed a 4 and 6 to take Lucknow home.

LSG will next face Rajasthan Royals on 10th April.