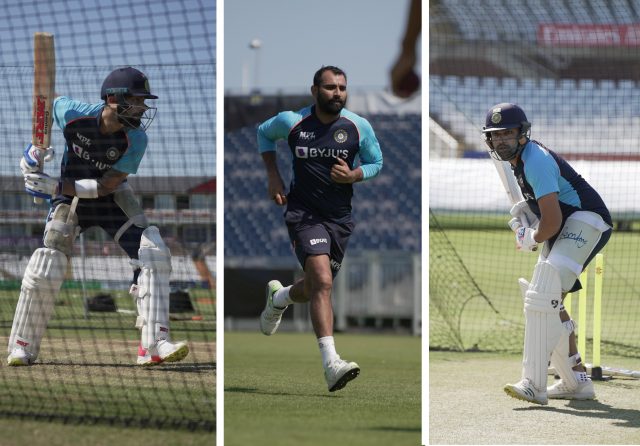 The Virat Kohli-led Indian Test team has reached Durham after a two-week-long break. India will play two tour matches ahead of the Test series against England. The first of the two tour games will be played from July 20 against Combined Counties.

Indian opening batsman Mayank Agarwal gave the fans a sneak-peek into India’s first net session in Durham, in a video posted by the BCCI.

As #TeamIndia regroup in Durham, @mayankcricket gives a behind-the-scenes tour, with @cheteshwar1 making a cameo 👌 👌- by @RajalArora

“I thought it was good to regroup and come to the Durham cricket team. It was not a very heavy session. It was a session where all of us got together, regrouped, did the warmups together, played some football. We just want to ease into things, just get back into preparations and get back into action,” said Mayank describing India’s practice session.

Getting a hit at the ground in an open net is fantastic: Mayank Agarwal

Virat Kohli and the rest of the Indian batting line-up hit the nets to hone their skills to counter the English conditions. The practice session was held at the Durham Cricket ground. Mayank Agarwal said that it feels good to practice on the actual ground. He added:

“Obviously getting a chance to get a hit at the ground in an open net is fantastic. It just feels good to play in the actual ground so you get a feel of the wickets and the conditions and everything else.”

Mayank Agarwal, who is also an occasion bowler rolled his arm over in the nets. He said:

“I also bowled a little and rolled my arm over, which was good felt nice. I know I can add value there.” He jokingly added, “Hopefully, it doesn’t come to that when we are playing the game.”

The five-match Test series between England and India begins from August 4, at Trent Bridge, Nottingham.