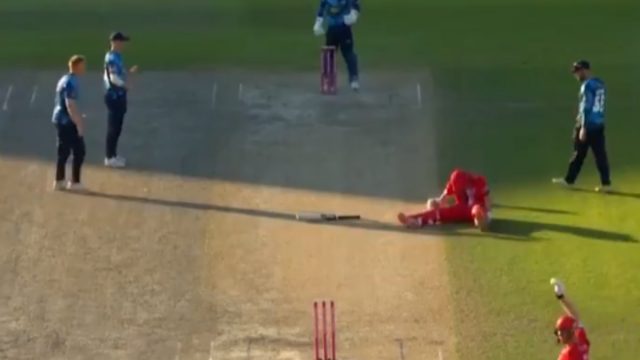 In a brilliant display of sportsmanship spirit, the Joe Root-led Yorkshire team refused to run out injured Lancashire batsman Steven Croft, during a T20 Vitality Blast match at Old Trafford.

Chasing Yorkshire’s 128, the Lancashire team was five down for 114, needing 15 runs to win from the last three overs. Luke Wells and Steven Croft were well set on the crease. On the first delivery on the 18th over, Luke Well’s hit a flat-batted shot to long-on and ran a quick single.

While the non-striker Steven Croft stumbled and fell and was lying in pain halfway on the pitch. Yorkshire had an easy opportunity to run out Steven but they refused to do so.

What would you have done?

Croft goes down injured mid run and @YorkshireCCC decide not to run him out#Blast21 pic.twitter.com/v1JHVGLn1T

The medical staff treated Croft’s injury and he was able to resume his batting, helping Lancashire to win the match by four wickets.

Excellent demonstration of sportsman spirit from @root66 . Such a wonderful role model. https://t.co/WCiBVJjqAL

We made a very difficult decision under pressure: Joe Root, Yorkshire Skipper

The Yorkshire skipper Joe Root said that his team made a very difficult decision and is relieved that the injury wasn’t serious.

“As a side, we made a very difficult decision under pressure. (Croft’s injury) looked very serious at first glance. In many ways it was a relief it was nothing serious.” Root said as quoted by Cricket Australia.

“I am sure there will be many different opinions. Many people would have handled it differently,” he added.

“I can’t believe what I’ve just there, frankly, as a professional sportsman. I’m baffled by that, I really am,” said Butcher to Sky Sports. “I found the whole thing completely bizarre,” he added.

Lancashire’s win against Yorkshire on Saturday sealed their spot in the quarter-finals of the T20 Vitality Blast.