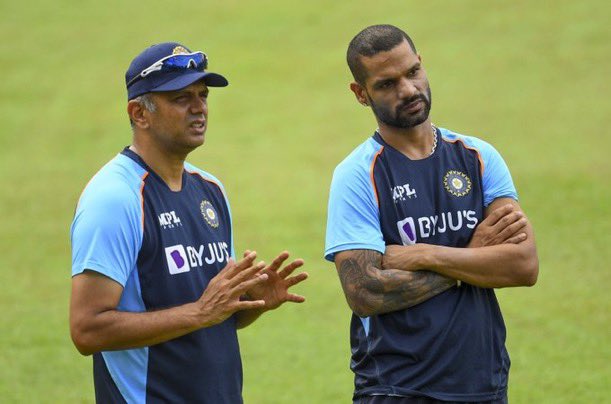 The current skipper of Team India, Shikhar Dhawan, has opened up on the coaching techniques of Rahul Dravid and Ravi Shastri. While Shastri is away with the Test side in England, Dravid has been appointed as the head coach for the Sri Lanka tour.

Addressing a press conference ahead of the first ODI in Sri Lanka, Shikhar Dhawan said that while Dravid is calm and composed, Shastri is a bit on the aggressive side. While accepting that he has enjoyed playing under both, he mentioned that both have their own set of skills to charge up the cricketers.

“They (Dravid and Shastri) both have their own qualities and they both are very positive people. I have spent time with Ravi Bhai (Ravi Shastri) and their ways to motivate are different,” Dhawan was quoted as saying during a press conference on Saturday.

“Ravi Bhai’s energy is a bit strong, whereas Rahul Bhai (Rahul Dravid) is very calm, composed, and strong as well, so everyone has their own way and I enjoy playing under both of them,” he stated.

I have a good relation with Rahul Dravid: Shikhar Dhawan

Previously, Shikhar Dhawan had said that he shares a good relationship with former India skipper Rahul Dravid. The India opener went down memory lane and recalled the time when he played in the Ranji Trophy alongside ‘The Wall’ of Indian cricket.

“I have a good relation with Rahul Bhai. When I started playing Ranji Trophy, I played against him, and I have known him since then. When I went to play India A match, I was the Captain, and he was the coach, so there was interaction. While he became the Director of NCA, we used to go there for around 20 days, so we had a lot of interaction,” Dhawan had said.

The first ODI between India and Sri Lanka is scheduled to take place on July 18 (Sunday) at the R Premadasa Stadium in Colombo.