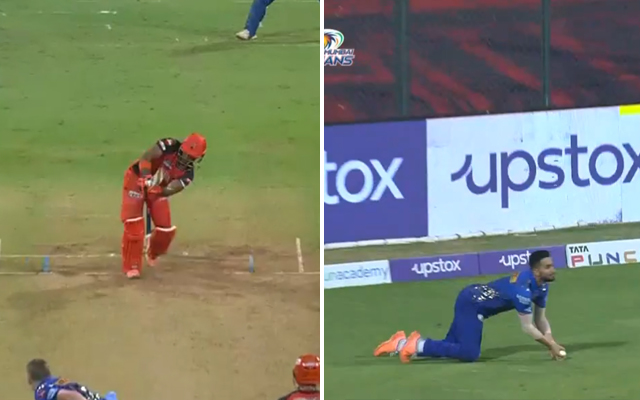 Mumbai Indians spinner Mayank Markande took an excellent catch to dismiss Nicholas Pooran at the Wankhede Stadium in the Indian Premier League 2022 match. The Sunrisers Hyderabad power-hitter had to walk back to the pavilion for 38 runs.

Nicholas Pooran walked out to bat at number four after the dismissal of Priyam Garg. The Sunrisers Hyderabad were 96/2 in around 10 overs. Pooran got together with Rahul Tripathi to consolidate on the great start. They put on 76 runs partnership for the third wicket stand.

In the seventeenth over, Nicholas Pooran was caught by Mayank Markande off Riley Meredith’s bowling. The ball was on Pooran’s pads, which flicked, but did not get the power behind the shot. The ball was caught by Mayank Markande at the deep backward square leg. Mayank dived forward and got his hands under the ball, to complete a brilliant catch. During his stay, Pooran managed 38 runs off 22 balls, including two boundaries and three sixes.

The Sunrisers Hyderabad managed to put on 193 runs at the end of 20 overs. Rahul Tripathi played a fantastic knock of 76 runs off 44 balls, including nine boundaries and three sixes. He was well supported by Pooran and Priyam Garg. Ramandeep Singh was the pick of the bowlers for the Mumbai Indians. The Kane Williamson-led team will be hoping to defend the score, to stay alive in the playoffs race of the Indian Premier League 2022 season.

I enjoyed a lot: Priyam Garg on opening the innings for Sunrisers Hyderabad

Priyam Garg replaced Shashank Singh in the Sunrisers Hyderabad playing XI against the Mumbai Indians. The youngster did not get a single opportunity in this season, before this game. He was given a chance to open the innings, and made the most of it.

The Sunrisers Hyderabad batter scored 42 runs off 26 balls at a strike rate of 161.54. Reflecting on his innings, during the mid-innings break, Garg expressed that the enjoyed his time out in the middle. He also opined that with the bowling attack that they have, 194 is a good target.

“I enjoyed it a lot. I was practicing to open because the franchise told me I would play as an opener this year. The new ball was moving a bit, but the old ball was coming on nicely. I think it is a good total, but we are around 10-15 runs short given where we were at one stage. But with our bowling attack, we have a good score,” said Priyam Garg.