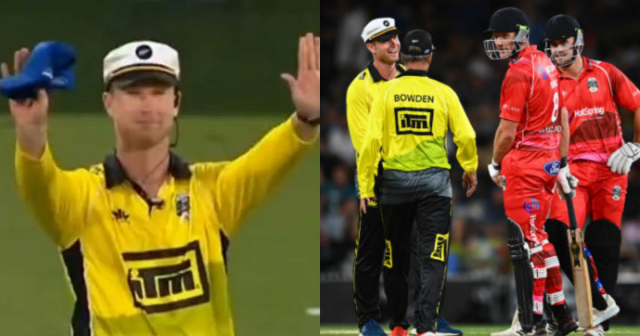 Kiwi All-Rounder James Neesham was seen doing umpiring duties in a T20 Black Clash match on Saturday. The T20 Black Clash is an annual event in which the top rugby and cricket players compete in a T20 cricket match. The game raises revenue for the welfare budgets of New Zealand Rugby and Cricket Players Associations.

Neesham umpired in the match for the second year in a row. In the last year’s match at Christchurch’s Hagley Oval also, Neesham was the umpire. The game was played at the Bay Oval in Mt Maunganui.

Explosive batter Brendon McCullum was a part of ‘Team Rugby’. McCullum is most renowned for his cricketing abilities, but he was also a skilled rugby player when he was younger. Meanwhile in the match, Team Rugby defeated Team Cricket by six wickets.

The 31-year-old All-rounder is a T20 specialist. He has represented New Zealand in 38 T20Is and played 12 IPL matches. Neesham will be a popular choice in upcoming mega-auctions due to his abilities in all three departments of the game. He’s a powerful middle-order bat who can pick up crucial wickets with the ball and is also a gun fielder.

The Mega Auction for IPL 2022 will take place on the 12th and 13th of February, with the tournament tentatively set to begin on March 27.