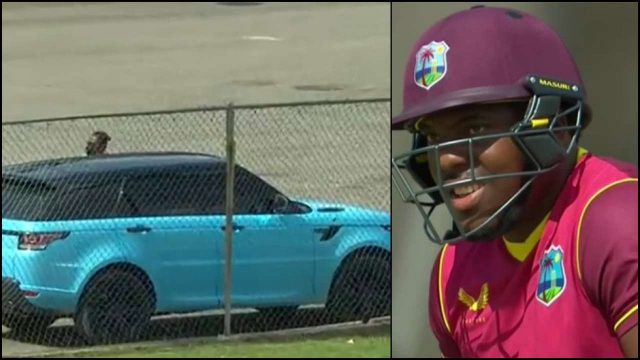 Odean Smith played an instrumental role with his all-round show in the West Indies win over Ireland in the first ODI at Sabina Park in Jamaica. West Indies players are known for their power-hitting ability and Smith is no different. He has shown glimpses of being a promising power hitter in his short international career with a huge six that hit a standing car.

Smith came to the crease after the fall of the 8th wicket. He had only a few overs to get his eyes set and show his power-hitting ability. He looked good in his short stay at the crease. He hit two sixes And one four in his innings of 18 runs in just 8 balls.

In the 48th over of the West Indies innings, Odean Smith smashed the 3rd ball for a huge six that went on to create a dent in the car standing outside the Sabina Park in Jamaica.

Smith took Ireland Fast bowler Joshua little to the cleaners as he smashed him for a humongous 84 meter six in the deep extra cover region and it hit the standing car of Sheldon Cottrell.

Odean Smith had a dream start to his ODI career as he picked up, crucial 2 wickets late in his spell that changed the match in the favour of the hosts. West Indies eventually went to win the close match by 24 runs to go 1-0 ahead in the series.

Meanwhile, the second ODI between West Indies vs Ireland has been rescheduled Amid the Covid-19 outbreak in the Ireland camp The decision was taken after 3 players returned with a positive result for the virus. Adding to that is an injury to 2 players.