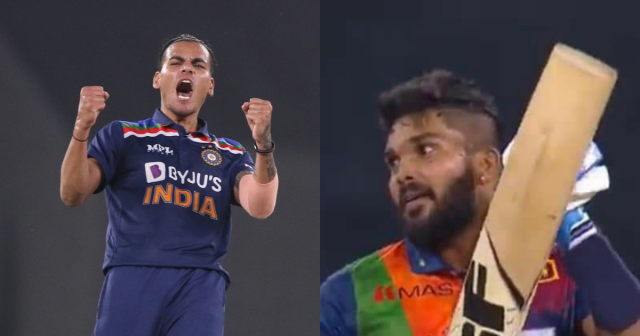 Team India cricketer Rahul Chahar gave a fiery send-off to Sri Lanka all-rounder Wanindu Hasaranga in the 2nd T20I at the R Premadasa Stadium in Colombo. Chahar looked pumped after he bounced back with a wicket after being hit for a six.

Hasaranga went after a wide leg-spin from Rahul Chahar to slice it to Bhuvneshwar Kumar positioned at the point region. Rahul Chahar had a few charged-up expressions and Hasaranga didn’t shy away as well, as he apparently applauded the trickery that fooled him.

The enforcer was forced into a trap here by Rahul Chahar as Wanindu Hasaranga tried to cash in on the momentum hitting another six to close in the game.

Meanwhile, batting first, India posted 132 runs on a sluggish Colombo wicket. Sri Lanka will be very happy with their effort. Shikhar Dhawan tried to play the sheet-anchor role as he often does but fell to the guile of Akila Dananjaya. The other batters found it hard and India have ended up with a sub-par total.

But this isn’t an easy pitch to chase and India have 3 regular spinners with a part-timer in Nitish Rana to chip in as well.