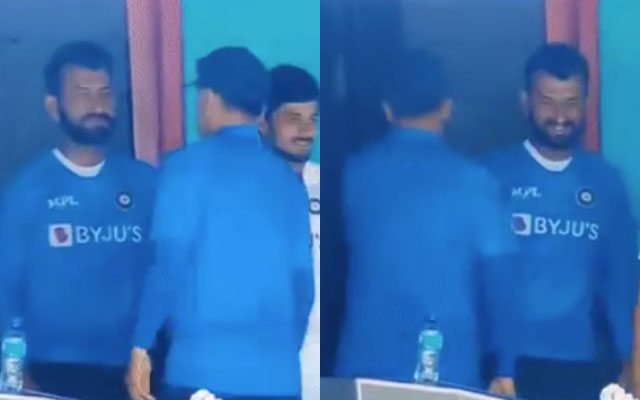 Indian head coach Rahul Dravid was seen giving underfire batsman Cheteshwar Pujara a pat on the back after the right-hander managed a golden duck in the first innings of the ongoing first Test match against South Africa in Centurion.

With youngsters like Shreyas Iyer, Hanuma Vihari, and Suryakumar Yadav emerging through ranks, many wanted Pujara out of the line-up for the Boxing Day Test. However, the team management decided to persist with the Saurashtra batter and included him in the playing XI.

But Cheteshwar Pujara failed to get off the mark, as Lungi Ngidi’s inswinger took the inside edge of the former’s bat and Keegan Petersen took an easy catch. The veteran batsman was seemingly disappointed with his poor display, however, Rahul Dravid was seen consoling Pujara, the video of which has now gone viral.

The duo of Cheteshwar Pujara and Ajinkya Rahane began the high-profile series against South Africa under intense scrutiny over their spots in the playing xi. While Rahane answered his critics with a measured unbeaten knock on Day 1,  Pujara got out for a 1st ball duck.

He has now gone without scoring a Test century since his magnificent 193 in Sydney Test against Australia in 2019. However, Pujara has made half-centuries here and there, including some gritty knocks in India’s 2-1 historic Test series win in Australia in 2020-21, but his bat has been silent when it comes to big runs.

India on ascendency after day 1 in Centurion

Virat Kohli won the toss and chose to bat first. The Karnataka batting duo Mayank Agarwal and KL Rahul proved the decision of the captain right with a flying start. They added 117 runs for the first wicket before Lungi Ngidi dismissed Agarwal for 60 runs before dismissing Cheteshwar Pujara the very next ball. Captain Virat Kohli made 35 runs in a century stand with Rahul before Ngidi enticed him enough to edge a wide ball to first slip.

Meanwhile, the start of day 2 has been delayed due to inclement weather.