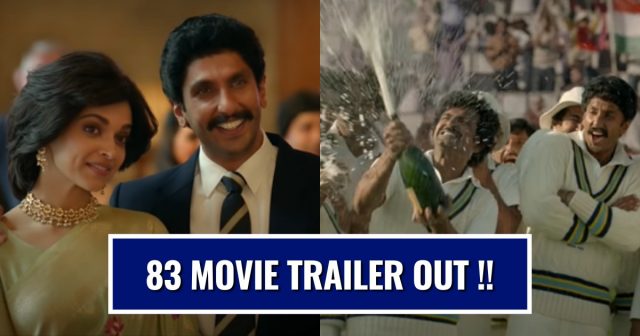 Bollywood actor Ranveer Singh has shared the teaser of his upcoming film 83 which details the story of India’s maiden World Cup win back in 1983. Ranveer will portray the role of Kapil Dev with Deepika Padukone playing the role of his wife Romi Bhatia.

The film is directed by Kabir Khan and co-produced by Khan, Vishnuvardhan Induri, Deepika Padukone and Sajid Nadiadwala. It was to be released last year but was postponed for the COVID pandemic with the theatres closed all over the country. Now it will be released on December 24, 2021.

The trailer shows clips of a few moving scenes from the movie. The 1983 World Cup win was a momentous occasion of Indian cricket. It inspired an entire generation to take the game as a profession and play for the country. Kapil Dev, Sunil Gavaskar importantly became the role model of many young cricketers who started their careers near about the 1990s.

Meanwhile, Kapil Dev’s wife Romi Bhatia spoke about enacting with the crew of the film. She said that it was “It was nice to work with Ranveer in a slightly more realistic setting. Not having to mouth such intense dialogue with that kind of language like we did on three films. It was refreshing. In fact, we had to remind ourselves that ‘this is the same actor that I’ve worked with”.

The movie is set to be released Hindi, Tamil, Telugu, Kannada, and Malayalam. The release of this movie is highly awaited and it is set to be a roller coaster ride.