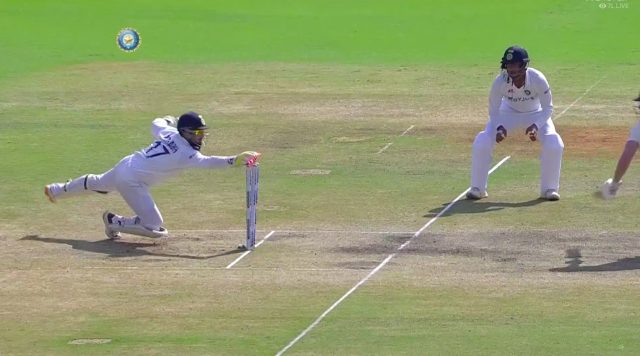 Team India wicket-keeper batsman Rishabh Pant pulled off a brilliant stumping to draw the first blood in the morning session of day 4 of the second Test against England at the MA Chidambaram Stadium in Chennai.

Virat Kohli started the day with Mohammed Siraj and Axar Patel as England adopted a cautious approach. Axar hit the right areas as it missed the edge a couple of times before the Indian skipper unleashed his main man Ravichandran Ashwin into the attack. The Chennai crowd welcomed their home boy with a loud cheer and Ashwin struck on the first ball thanks to a brilliant stumping from Rishabh Pant.

Rishabh Pant at his best to dismiss Dan Lawrence

It was a pre-meditated move to give the charge has cost  Dan Lawrence his wicket here. Ravichandran Ashwin saw it coming and cleverly drifted one into the right-hander. Dan Lawrence was caught in no man’s land as he looked to flick, the stride was so big that the ball easily passed through his legs.

Also Read: Watch – Virat Kohli Gets Into An Heated Argument With Nitin Menon

It then spun and Rishabh Pant was quick on it, moved swiftly to his left, and effected a sharp stumping. The bails came off in a whisker even as Lawrence was struggling to get back in. No need for the third umpire and India strikes on the fourth day.

With the departure of Dan Lawrence, India just now need another six wickets to level terms in the series. England will want Joe Root and Ben Stokes to bat as long as possible as they chase a mammoth total of 482 runs with two days of play still left.